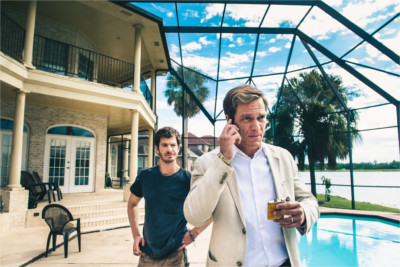 A powerful morality tale: Dennis Nash, whose house has just been repossessed, is offered a job by property owner Rick Carver, forcing Nash into overseeing the eviction of others. Viewers are asked to examine what lengths they would go to in Nash’s position. “Combining economics, class and wealth inequality to form a deeply compassionate portrait of a family struggling on the margins, it’s a refreshingly intelligent and socially aware thriller about how the commodification of the house has irrevocably changed the definition of the ‘home’, focusing on the human tragedy that accompanied the numerous court-ordered repossessions of the sub-prime market crash.” Patrick Gamble, Cine Vue. (Cert 15)
Dir: Ramin Bahrani 112mins USA 2014

This American drama, directed and written by Ramin Bahrani (Goodbye Solo, 2008; Man Push Cart, 2005), is based on a true story. Andrew Garfield (The Social Network, 2010; The Amazing Spider-Man franchise) plays Dennis Nash, a construction worker who is evicted from his home by real estate agent Rick Carver, played by Michael Shannon (Man of Steel, 2013; Take Shelter, 2011; The Iceman, 2012). However, in an unexpected twist, Rick offers Dennis work, which involves evicting families from their homes in the Orlando area of Florida. The film follows Dennis as he tries to get his house back, whilst facing the dilemma of getting rich quick by carrying out his new boss’ unethical business strategy.

Bahrani used a 24mm focal length lens in the close-ups of Andrew Garfield’s face to better capture Dennis’ emotions (which also captured the first time Garfield had grown a beard for a film role). Michael Shannon picked up numerous nominations for his role in the film, including the Golden Globe for Best Supporting Actor and at the Screen Actors Guild Awards in 2016. Bahrani dedicated his film to the famous film critic Roger Ebert, who died in 2013.

“99 Homes is by no means a perfect film but it can achieve something more precious and rarer than glossy perfection: it can take you by the shoulders and shake the apathy and complacency away” Jessica Kiang, The Playlist

A penetrating and devastating portrayal of the human tragedy and conflict spawned by the sub-prime mortgage crisis. Riveting

Totally engaging, with great insight on the issues it exposed

A gripping experience with stellar performances from Shannon and Garfield. It gave us a personal perspective on the financial meltdown, that made it such compelling viewing (cf. Inside Job and The Big Short)

American Gothic – but so close to reality!

I enjoyed this film

Very thought-provoking – was it shown in the USA?

Excellent film but difficult to watch at times

Powerful story. I think I missed some of the subtleties, though, because I couldn’t understand most of the dialogue

The ending was better than I expected. I was sure some one was going to get shot!!

Isn’t America great – even before Trump? (Although he did get a mention!)

Something else for Trump to sort out. A strange sort of American justice