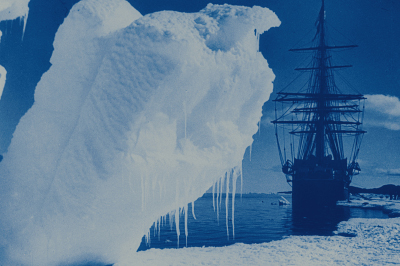 Ponting’s 1924 documentary about Scott’s expedition to the South Pole using the footage he shot of the scientific work, Antarctic wildlife, life in camp, expedition equipment, and team members. Restored by the BFI National Archive, including tinting and toning to the original instructions. A silent film with a new soundtrack by Simon Fisher Turner. (Cert U)
Dir: H G Ponting 104 mins UK 1924

A Special Event for the Abingdon Arts Festival

Herbert Ponting was official photographer to the British Antarctic Expedition led by Captain Robert Scott 1910-12, tasked with keeping a detailed cinematic record. The resulting footage was shown in Britain in various different versions between 1911 and 1933 (the last with sound). The British Film Institute spent nearly 20 years restoring all of Ponting’s original footage, and this new film is the result, together with a music score by Simon Fisher Turner. Ponting was a stills photographer who had never previously used a cine camera, which makes the clarity and quality of the pictures all the more remarkable. He used toning and tinting to improve the depth and lustre of his images, and this has been faithfully reproduced digitally by the BFI’s restoration team.

Many of the images in the film are breathtaking and awe-inspiring. The passage of the expedition’s ship Terra Nova through the sea ice was captured by Ponting suspended precariously from two planks fixed over the ship’s bows. In addition to filming the voyage south and the Antarctic fauna, he took footage of the expedition’s scientific team, often engaged in day to day domestic activities. The effect of all this upon British audiences of the time, who were substantially unfamiliar with pictures of the Antarctic, can only be guessed at.

No footage exists of Scott’s ill-fated final journey to the South Pole, as Ponting did not accompany them. Consequently, the last half hour of the film consists of extracts from Scott’s diary, collated with stills and animated film of model figures in a blizzard. However, the telling quality of Scott’s prose and Ponting’s polished commentary in the intertitles combine to make this part of the film both haunting and poignant as it tracks the doomed party on their journey and relates the hardships they endured.

“Today, we are familiar with documentaries from inaccessible places, but here to some extent, is the mystery and majesty of the landscape restored”. Cath Clarke, The Guardian.

“Fantastic and very moving but also amusing with the animals, especially the cat and its jumping.”

“Absolutely wonderful! Such courage and endurance in pursuit of a dream.”

“The Great White Silence deserves its place in the history books for not just the technical excellence, but as a cinematic memento of an important feat in human history.”

“Absolutely excellent. Riveting. Would love to see it again.”

“Excellent film. Voice-over rather than titles might have been preferable. Music, o.k.”

“Scott planned everything geat detail. He had food for four on the last leg and amazingly at the last minute took Evans, an extra man, so they didn’t have enough food. A great mystery.”

“Some remarkable footage with good signage to accompany it. Enjoyed the ‘Penguin’ sequence.”

“The penguin sequence went on and on.”