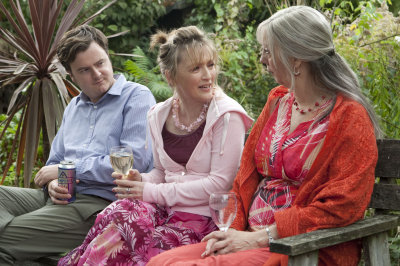 The lives of a couple, their family and friends over a year. Tom (Jim Broadbent) and Gerri (Ruth Sheen) live in a leafy London suburb, have rewarding jobs, and enjoy gardening and working their allotment. They are the hub where their less fortunate friends seek sanctuary, notably Mary (Lesley Manville in bravura form) and Ken. Full of recognisable characters, minutely observed without caricature or parody. “…presents viewers with a rock-solid decades-old marriage, secure in its moorings and smug in its harbour” – Ann Hornaday, Washington Post. (Cert 12A)
Dir: Mike Leigh 125 mins UK 2010

Mike Leigh’s direction is on tip-top form, as are the performances from the ensemble cast of Leigh stalwarts. We follow a year in the life of comfortable domesticity of a late middle aged couple Tom (Jim Broadbent) and Gerri (Ruth Sheen). Theirs is a long and happy marriage, and life, thus far, has been good to them. Their friends by contrast have not all fared so well. Mary (Lesley Manville) is Gerri’s work friend, whose life is catastrophic, and personal happiness eludes her. Ken (Peter Wright) is Tom’s widowed friend, who cannot quite regain his mojo. Alcohol features large in both their declines. To this mix add gardening, allotment tending, parties, engagements and funerals and you have the ingredients of all our lives. It is in Leigh’s ability to highlight fundamental human truths that his story telling is transformed from the mundane to compelling observational film making. The gentle pace enhances the mood of the piece as we follow each season.

“Another Year gave me characters I could love, feel uneasy about, identify with or be appalled by.” Roger Ebert, Chicago Sun-Times

“All too believable! Great music.”

“Depressing in the extreme, though some funny moments. Hideous characters – could not decide which I disliked most.”

“I think that Mike Leigh’s silences are not as good as Pinter’s. Did Imelda Staunton ever get off to sleep? I did.”

“Some people think Mike Leigh’s films depressing, but no-one can say he shows people as they really are in all walks of life.”

“We would surely – nearly all of us – find Tom and Gerry insufferably self-righteous, smug and generally irritating (reach for Roget). So why did most of us laugh WITH them in their assumed superiority? And why does Leigh do this – it’s surely deliberate on his part.”

“What a pleasure to see a real film about real people in a normal environment. Great entertainment and the quickest two hours I have ever spent in this lecture theatre!!!”

“Beautifully observed and very sad, but with some wonderful Northern humour!”

“The answer lies in the soil.”

“Exquisite portraits of the characters and their relations. Well paced.”

“Another Year was an exceptional ensemble comedy drama that takes its time with its character development. Shame that some of the scenes went [on] for a bit too long and the ending was too abrupt for its own good.”