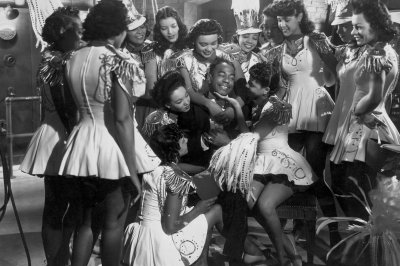 On March 22nd, as part of Abingdon Arts Festival, we are showing STORMY WEATHER (75mins, USA, 1943, Cert U), the classic musical showcasing such legendary greats as Lena Horne, Fats Waller, Cab Calloway and Bill ‘Bojangles’ Robinson. There will also be live jazz with the George Haslam Trio. The venue is the King’s Head & Bell public house, starting at 7.30pm

A Special Event for the Abingdon Arts Festival

plus live jazz with the George Haslam Trio

at 7.30: “Live jazz by our trio tonight will be played before and after we have the pleasure of seeing such jazz greats as Fats Waller, Cab Calloway and, of course, Lena Horne – not an enviable position but George Haslam, Jez Cook and Steve Smith have all cut their teeth on the essential bones of jazz. The line-up of baritone sax, guitar and double bass presents a pared down format for some lightly swinging and, I’m sure, most enjoyable jazz and blues” – George Haslam.

At the end of WW1 Bill Williamson (ie Bojangles Robinson) meets Selina and hopes to settle down with her. Many years later …

“Fox’s all-black musical answer to MGM’s Cabin in the Sky. No Minnelli this time, so no contest, especially as the wispy plot – one of those up-down romances that span 25 years – serves chiefly to string together a revue collection of items matching the various periods. With those stars let loose on classic songs, and the Nicholas Brothers providing a stunning tap dancing finale, who’s complaining? Often quite imaginatively staged, the numbers are strikingly well shot.” Tom Milne, Time Out Film Guide.

“Stormy Weather is a first-rate show… Musically, too, it is a joy to the ear, especially when Miss Horne digs deep into the depths of romantic despair to put across the classic blues number, after which the picture is titled, in a manner that is distinctive and refreshing” – Thomas M. Pryor, The New York Times (22nd July 1943 review)

“The live jazz music is the kind of music [to] get lost into, whilst the same could be said for Stormy Weather. You could forgive [it] for its dated stereotypes, but the jaw-dropping dance routines should even please the most cynic of film buffs.”

“They really don’t make them like that anymore. And you can see why.”

“Barney Bigard – eat your heart out!”

“George [Haslam, whose trio played the live jazz] I can watch and listen to forever. The film would have been perfect if kept to no more than one hour.”

“Made a song and dance of it!”

“Hope you do this again.”

“Amazing dance and song, not much plot but a lot fun, though too strident at times, especially towards the end.”

“The evening was excellent and the film was good fun, but was it ‘good’ as a film?”

“What a joy to see them dancing!!”

“Really enjoyable film in most surprising way – I usually find musicals so strange with characters just bursting into song, but this format just showed the story in a showbiz setting and with fantastic performances throughout.”