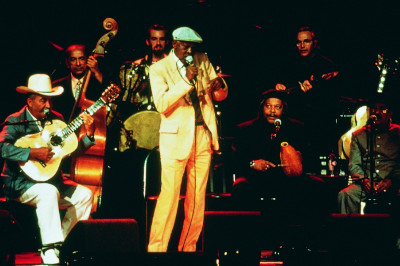 In 1996 Ry Cooder gathered together some of the greatest names in the history of Cuban music to collaborate on the best-selling and Grammy winning album The Buena Vista Social Club. This ground- breaking documentary, inspired by the aibum, includes appearances by legendary performers Ry & Joaquim Cooder, Ibrahim Ferrer, Ruben Gonzales, Eliades Ochoa, Omara Portuondo, Compay Segundo and many other renowned Cuban musicians. (Cert U)
Dir: Wim Wenders 105 mins Ger/USA/UK/Fra/Cuba 1999

When American musician Ry Cooder and his son Joachin travelled to Cuba in 1996 to discover what had happened to Cuban musicians following Castro’s Communist revolution, he made a wonderful re-discovery of the then octogenarian members of the Buena Vista Social Club. This group of musicians were so-called after the music hall in which many of them performed before the Communist takeover of Cuba. Under the steady gaze of German director Wim Wenders, tonight’s film is part concert footage, part documentary, in which we piece together the changed lives of the musicians against the backdrop of the faded grandeur of Havana, its streets and old colonial architecture. It is a feast for both the eyes and ears. Music, as we see, always transcends politics and allows the beating heart to soar.

This film is thus a singularly joyous celebration of Cuban music and its musicians and since it was made, the Buena Vista Social Club has toured America and Europe to rapturous audiences. Finally, as relations between America and Cuba have thawed under the presidency of Barack Obama, the timing of this screening may be seen as not inapposite in these changing times.

“Instead of filling the film with reminiscences of the old days, Wenders mainly has his subjects talk about themselves: where they came from, how they grew up, and how they live now. In the end, he seems to believe, like Cooder, that the music speaks for itself. ‘This music is solid – it’s old’ says Cooder. ‘These guys, they are the music – they embody the music. They’re the source. Their music hasn’t changed. Why would it?'” Sam Adams, Philadelphia City Paper interview with Ry Cooder, June 1999

“The best silent short we’ve had for some time but not quite so funny with sound.”

“I loved this short!”

“In order to lower the window, the dog would have had to put the key in the ignition.”

“Sheer brilliance! Thank you so much for bringing this film to Abingdon.”

“Totally enjoyable celebration of music and life – we should have applauded at the end!”

“The essence of musicianship. Sheer enjoyment – even the New York (segment).”

“Worked best as an insight into the musicians’ backstory, rather than a straightforward concert film. Although mostly well paced, it did have moments of loss of momentum. Overall the film was an interesting snapshot of those classic Cuban musicians.”

“Some good musicians and infectious music. So much more enjoyable than some of the stuff they put out today.”

“Most enjoyable, after the disappointment of Frank last week.”

“Loved the cinematography and the ‘love letter’ to a faded and crumbling Havana but found the film a bit overlong and repetitive.”

“The music was great. We’ve been to Cuba twice and would liked to have seen more of the country.”

“I struggled to find anything visual at times.”