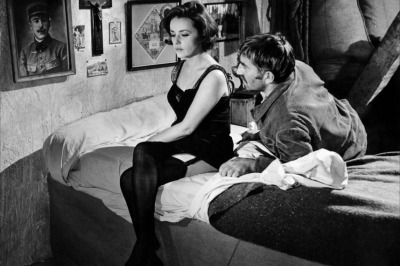 Célestine, played by Jeanne Moreau, is the titular chambermaid. Set in the 1930s, the film’s male characters include, variously, a ‘liberal’, a moderately right-wing proprietor and exploiter of women (especially chambermaids) and an extremely right-wing, anti-semitic fellow servant. Not to mention a foot fetishist. None is spared by Buñuel, as he mordantly integrates the personal and the political. This was his first script collaboration with Jean-Claude Carrière. (Cert 12A)
Dir: Luis Buñuel 93 mins France 1964

The film, set in the 1930s, sees Céléstine take up her appointment as a chambermaid at the Monteil family’s country house. As you might expect in a Buñuel film, sexual repression and the associated hypocrisy prevail in the family and retinue. In the case of Joseph, the driver, this extends to murder and Céléstine seeks to entrap him. Joseph, and this is far from irrelevant padding, is a man of his time, right-wing, nationalist and anti-semitic. Although there is a country house narrative, this is far from Agatha Christie territory – she was after all not famous for her characters’ leather boot fetishes. The final shots of the film and the concluding freeze frame, over in a very few seconds, suggest that Buñuel is linking private proclivities to major events in the public realm.

“… the movie pivots on Buñuel’s favorite subject: men twisted inside like rope by the tensions of their own absurd desires, and by their preposterous presumption that they’re worthy of their own obscure objects” Michael Atkinson, the Village Voice

“Good, taut direction – as always. And, for once, the Church got off lightly!”

“As ever, Buñuel had a go at the gentry, the army, women and the Church [but not much]. How depressing [1930s] provincial France seemed.”

“Dramatic ending! The film was an effective analysis of 1930s France.”

“Very absorbing and convincing. How it felt to be part of the community – but the ending was rather a ‘fizzle-out’. Celestine [was] well done. Totally French settings and characterisations.”

“This predictably over-the-top French comedy drama had all the elements to draw you into it – child murder, class and the old man’s boot fetishism – he was messed up even by the standards of the ‘60s. It was also a shame that the abstract [style] of the ending was not used throughout the film – would’ve made it more stimulating to watch.”

“Enjoyable and quite amusing at times but [I] found it difficult to understand the characters and their motivations or at least find them believable. Jeanne Moreau certainly had a [powerful] screen presence!”

“Very enjoyable, with some excellent acting but didn’t understand the ending!”

“Good acting but [film] very episodic in the end.”

“Unusually, this could have done with another 15mins to sort out the storyline! However, I did enjoy it.”

“Some useful tips on pruning – but how did the Committee know [just] how topical this film would be? viz, Dominique Strauss-Kahn, the European crisis and Downton Abbey. Nice to see Jeanne Moreau in her pre-wrinkle prime.”

“A bit shallow in terms of how the characters were portrayed, with little development – but still it was interesting and fun!”

“What a strange film – very little sense of period – inconsistencies in [characters’] behaviour – story didn’t make sense. At least it was nice to look at.”

“I need to see some more Buñuel if I am to understand a film like this. Nothing added up or held together!”

“I need to see this again to make sense of it. When do we get some more short films?”

“Who murdered the girl? Is there a ‘cold-case’ sequel?”

“Not really that black and white!”

“I hope the Countryside Alliance doesn’t get to see this!”