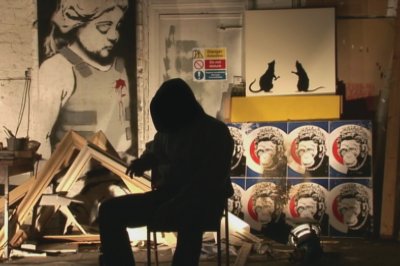 First screened in a brick vault accessed by a graffitied tunnel, this is a postmodern documentary made by director/artist Thierry Guetta in collaboration with Banksy. Guetta, a chaotic, but likeable, home movie and documentary maker, sets out to explore the secretive world of the graffiti artist and meets the legendary Banksy. There are films within films, and the boundaries between fantasy and reality are smudged. Hilarious, mischievous, and whether you believe in it hardly matters. Addressing the paradoxes of the art world’s acceptance of street art, the film has paradoxes of its own. Perhaps another great rock and roll swindle? (Cert 15)
Dirs: Banksy, Thierry Guetta 82 mins UK 2010

This documentary-style film is an enjoyable romp from LA to the UK, through the secretive and elusive world of the graffiti artist. ‘Artist’ being a description depending on your point of view: does street art deface or embellish the urban landscape? Well, a certain Thierry Guetta, an LA-based French eccentric and prolific maker of home documentaries, thinks the latter and sets his gaze towards the graffiti world. His cousin ‘Space Invader’ is one of these artists. Guetta goes on a mission to investigate the lengths the artists are prepared to go to, risking arrest and personal injury in pursuit of delivering their anarchistic messages. His ultimate challenge is to interview the renowned Banksy. Having finally tracked him down, Banksy submits to Guetta’s charm and – in suitably disguised form – appears before the camera, giving us a glimpse into his studio and work.

At this stage in the film we have become aware of the excesses of Guetta’s character, and we watch how, with modest encouragement from his new best mate, Banksy, Guetta launches himself into the art world as ‘Mr Brainwash’. Parallels are evident between Guetta and that late great self-publicist, Malcolm McLaren, Svengali to the punk band the Sex Pistols who, in Julien Temple’s 1980 documentary The Great Rock ‘N’ Roll Swindle, set about making a million from the punk movement.

“The exasperating element of the story is that Banksy, as he ruefully admits, encouraged this charlatan [Brainwash]. Too much to hope he’ll ever go to the wall – that’s how this whole thing started.” Anthony Quinn, The Independent

“Very entertaining – a great fable about the way the art world works.”

“Great fun. I feel however we have missed an ABCD [Film Society] fundraising opportunity by not selling merchandise. Where was the gift shop?”

“Have we all been framed or is life just a mystery?”

“I think the hoody Banksy is actually Damien Hirst . “Entrance through the larceny shop” – I was recently charged a £1.50 booking charge at the Tate Modern, Ryanair-style”

“Absolutely brilliant – life enhancing, funny and I loved the art, too.”

“What a very entertaining film!”

“Brilliant, witty, sardonic,very knowledgeable. You can sell anything with the right promotion.”

“It was constructed as two films spliced together. Part one was genuine and part two was Fake! Fake! Fake!”

“Not so funny as Spinal Tap. Banksy the unreliable narrator.”

“Entertaining but a bit pretentious.”

“Said all there is to say about modern art, really.”

“All human life is not beautiful.”

“Quite enjoyable at first, when they were showing the street art, but meandered [well] before the end.”