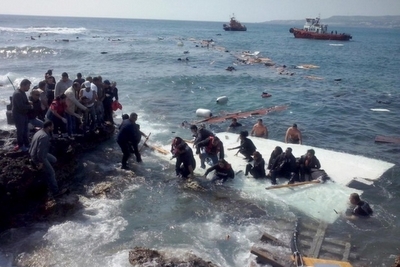 An inspirational documentary by Rosi. Set on the Italian island of Lampedusa, we see boatloads of desperate refugees arrive upon the shore. Rosi expertly but understatedly contrasts the ordinary daily lives and concerns of the islanders with the desperate plight of those arriving from Africa. He allows his subjects to tell their stories either in spoken or pictorial form and does not impose his own narration. This is a documentary of deep humanity. “His testimony, like many of the images in this film, should be compulsory viewing for all those politicians and others who would refuse these people a safe haven and a new home.” Geoff Andrew, Sight and Sound. (Cert 12A)

Directed, produced and photographed by Gianfranco Rosi, tonight’s film shows us aspects of two worlds, separate but in close proximity. First, there is 12 year old Samuele, a Lampedusan who lives what we might see as a normal life for a youngster, knocking about in the harbour with a chum, playing with a catapult and spending time with his family. Secondly, there are the refugees fetching up on the shores of this Mediterranean island southwest of Sicily. Some are still alive, having been rescued by the Italian coastguards – some are not.

For the most part, this is not a wordy film, which makes the words that are uttered immensely powerful. The Africans recounting their tales in biblical fashion, loud and rhythmic: by contrast, the doctor talking about his work with a degree of resignation. His work is clearly a moral imperative for him but there’s not a hint of self-righteousness about him.

Rosi was born in Eritrea in 1964. At the age of 13, he escaped the war of independence in an Italian Air Force ‘plane, although his parents remained behind.

Fire at Sea won the Golden Bear (Goldener Bär) at the Berlin International Film Festival in February this year, while his 2013 film Sacro Gra won the Golden Lion at the 70th Venice Biennale. Notably, and the first time for a documentary, Fire at Sea is reported as having its first run in the principal central cinemas of Rome.

The film (you will hear the popular song Fuocoammare broadcast by local radio station) was shot in 2015 and, of course, we know the story continues. Is this a film that can change hearts where necessary?

“At its culmination, Rosi’s film enters the heart of darkness, confronting the utter horror of the migrants’ seaborne sufferings, a harrowing moment followed by a beauteous image of light playing on silvery waves, truly a pillow-shot for the ages. Moral courage and filmic artistry exist side by side in this essential offering from a director gradually earning the right to be thought of as one of the greats of our era” Trevor Johnston, Sight & Sound, July 2016

This should be compulsory viewing for members of the House of Commons, especially David Davies and Amber Rudd!

I’m too upset to write anything

For me, a perfect documentary presenting a truthful picture (but probably not the only truthful picture) of a split amongst humans – those who, although very likeable, only watch (while trying not to, perhaps) and those who suffer. We were left to think about this split ourselves. Brilliant!

The film placed great demands on (one’s) attention – much to think about. Parallel lives not so uncommon?

A tour de force – Fishermen and the Fishers of Men

Beautifully made but very depressing

An excellent example of the show-and-don’t-tell approach to documentaries. With the balance of island life (contrasted with) the experiences the refugees go through, this was a visually arresting film that stayed with you long after the credits had ended

The doctor was so central and showed such incredible humanity in the midst of such large scale horrors. The film was not intrusive but showed us some real stories and people’s (lives)

For its impact following the doctor’s summary, this film must have an A but I found the ¾hr before the eye-test scene frustratingly slow and I could not hear much of the dialogue in the passage immediately after it

Powerful but domestic scenes too drawn out – too much of Samuele

Message not strongly focussed enough for a documentary. Too much bed-making and firing of catapults at trees

For me, it left many questions unanswered

Too many uninteresting episodes. Do you think ‘they’ give films awards for being worthy, rather than being good?