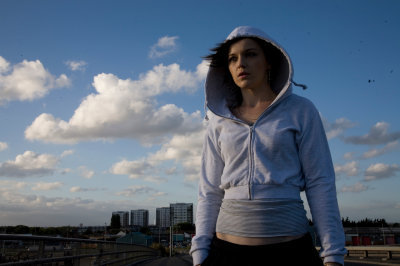 Fish Tank is set on a high-rise housing estate on the London – Essex borders, a world where no one seems to have any prospects. Witnessing the social and personal difficulties of a single parent family, we find 15 year old Mia (a bravura performance from novice Katie Jarvis) in conflict with her mother and the rest of the world. Into this moves the mother’s boyfriend, Connor (Michael Fassbender). A challenging but rewarding film, it won the 2010 BAFTA Best Film award. (Cert 15)
Dir: Andrea Arnold 118 mins UK 2009

“Well, that was certainly different!”

“Thought provoking, shocking and moving: more like this, please!”

“A good performance by Katie Jarvis”

“Excellent performance from Katie Jarvis but what is a poor girl to do, eh?”

“Superb acting. Slow, too slow halfway through but a convincing – an inevitable – ending.”

“Moving and unsettling, with some complex, very ambiguous but believable characters.”

“An unsettling film designed to unsettle the complacent”

“Enjoyable though a bit overlong, like so many films [these days]. Started off a bit artificial and stagey. Some scenes just didn’t work, eg those with the horse. And wasn’t Mia’s mother a bit of a caricature? Having said all that – very good!”

“Mia [was] a curiously sexless and unemotional 15 year old. Brilliant acting and scene setting but an unrealistic portrayal of both Mia and her mother. Great fun, nevertheless – a very compelling film.”

“Certainly packed an eclectic punch with the audience. With its complex characters and a varied soundtrack of contemporary R’n’B and classic soul, it certainly stands out in the current climate of gritty British dramas.”

“Apart from the superb lead actress – nothing!”

“A bleak trip around damaged boundaries”

“Could have been made 40 years ago – well, with different music. Needed more [blank]. Certainly didn’t manage [to be] compelling.”

“Grim, depressing but also rather boring”

“It’s a dog’s life – especially when you’re a tenant.”

“What were the chaperones doing?”

“What was Auntie Beeb doing supporting this [film]? We do not need it at our nice Film Society!”