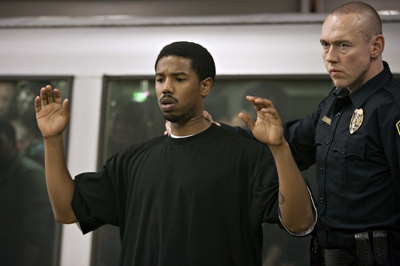 This powerful debut from Ryan Coogler, with resonance both in America and the UK, opens with mobile phone footage of the shooting of 22 year old Oscar Grant at Bay Area Rapid Transit Station in the early hours of New Year’s Day 2009. The killing of this young African—American man sparked rioting and anger among the local community. Coogler re-enacts the last day of Grant’s life in docudrama style. Michael B Jordan plays Grant, depicted as a flawed character who, after a spell in prison, is attempting to rebuild his life and repair his relationship with his girifriend Sophina and four year old daughter Tatiana. “… focuses on its subject’s humanity and assesses the tragedy on a personal rather than explicitly socio- political level. However, the way in which it fleshes out Oscar’s character makes it an acutely political work.” Ashley Clark, Sight and Sound. (Cert 15)
Dir: Ryan Coogier 85 mins USA 2013

The true story of Oscar Grant, a young black resident of Oakland, California, is followed through the twenty four hours of New Year’s Eve and the early hours of New Year’s Day 2009, culminating in his death at the hands of white Bay Area Rapid Transit police officers. During that time, he crosses the paths of friends, family, enemies and strangers, and a complex picture emerges. The fatal shooting (at BART Fruitvale Station) was videoed by witnesses using cell-phones and cameras.

Director Ryan Coogler examines the last twenty four hours of Oscar’s life, which builds into a portrait of middle-class Afro-American mores. Grant was no saint – he had already served two prison sentences and seemed to fall easily into the wrong crowd at the wrong time. Although he had a wife (Melonie Diaz) and supportive mother (Octavia Spencer), as well as being father to a four year old daughter Tatiana (Ariana Neal), he could not keep a job and seemed reluctant to face up to his responsibilities.

The film may not be perfect but it arrived at a pertinent moment in the debate over racism, gun violence and the killing of young black men in America – being no less relevant now than when it was first released three years ago. The shooting itself continues to be a major theme of protest and national soul-searching about racism and gun violence.

Since its Sundance Festival debut, Fruitvale Station has been picked up by the Weinstein Company (Harvey Weinstein being the film’s (uncredited) executive producer), which has ensured its wide distribution in the USA at least. This important film deserves all the attention it has thus gained.
Acknowledgements: Richard Mowe, EyeforFilm

“Fruitvale Station is about what we can imagine when we cast our gaze across the longstanding divides in this persistently, cancerously segregated American society” Steven Boone, rogerebert.com

“Ryan Coogler’s Fruitvale Station is a bold act of imagination and compassion” Peter Bradshaw, The Guardian

“Excellent minimalism, keeping the (message) open in its historical context”

“The central character gripped my attention throughout.”

“I really liked this.”

“So full of pain”

“Nicely done but didn’t understand it!”

“Very good but why Padre?”

“Powerful film and sadly a story of our time. Don’t vote for Donald Trump!”

“A story that needed to be told.”

“Straightforward drama and exercise in developing an understanding of Oscar Grant before and after the tragic event.”

“The real face of disadvantage in the USA – problems not yet resolved.”

“Beautiful how the film calmed us down in the final 5 or 6 minutes.”

“Well acted and effective if sometimes a bit laboured – but a moving story.”

“Violence across jobs and society at large”

“A well engineered film. USA gun culture leads to such situations and is the penalty for police carrying guns!”

“A good film, I guess but very noisy. I could follow very little of the dialogue.”

“Only able to understand one word in three but ‘got’ the plot. Well made and certainly made its point.”

“I couldn’t hear half the dialogue.”

“Did the credits name every single person on the train?”