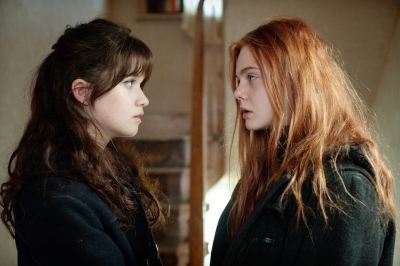 With the backdrop of the 1962 Cuban Missile Crisis, this is a story of friendship and deception between the two 17 year olds, Ginger and her best friend Rosa. The girls, best friends from childhood, but with differing aspirations, are about to choose their future directions. Ginger’s father is a dogmatic left-wing political theorist, while her mother, an artist, is frustrated in her role as a homemaker. Ginger embraces the exciting atmosphere of the times. Rosa, by contrast, wants to settle down and marry, in order to escape her single parent household. With excellent support performances from Timothy Spall, Oliver Platt and Annette Bening. “In Potter’s assured, caring hands ‘the personal is political’ assumes newfound breadth, depth and surprising emotional poignancy. It may be a slogan, but here it’s also a cry from the heart” – Ann Hornaday, The Washington Post (Cert 12A)
Dir: Sally Potter 90 mins UK 2012

Ginger and Rosa are best friends, baby-boomers born in adjacent hospital beds in 1945. By 1962 their teenage lives are overshadowed by the threat of nuclear war. The film explores their highly stressed personal/political situation which involves issues of relationships, sexuality and betrayal.

The director, Sally Potter, comes from an artistic family and describes herself as an anarchist and atheist. She started making films at age 14, then left school at 16 to concentrate on films, mainly shorts. Then began a long career as a performance artist, dancer, choreographer and composer. She returned to making short films in 1979. Since 1992 she has made seven feature films, of which Ginger and Rosa is the latest.

“A lovely, open performance from 14-year-old Elle Fanning, playing a troubled British teenager at the time of the October missile crisis in 1962, lifts this movie from Sally Potter. Despite being a US native, Fanning has an eerily good English accent of the Emma Watson/Hermione Granger type, although like all Americans doing Brit accents she takes it slower than the quick chirrup of the real thing.” Peter Bradshaw, The Guardian.

“Coming from anyone else, Ginger & Rosa would be a sensitive if predictable coming-of-age tale set in the mists of the distant past. But coming from writer-director Sally Potter, it’s a major surprise”. Rick Groen, The Globe and Mail.

“Brilliant. Probably the best film I have seen at the Film Society.”

“Can’t imagine how I missed this on general release. A powerful film which covered a lot. I would see it again.”

“Terrific, powerful indeed – but the pain of young women … ?”

“Very impressive, the mix of reality/unreality, entering into the confusion of being 15yo, sensitive to so much and not being truly understood by adults.”

“A compelling study of the fundamental forces of nature!”

“A powerful film about two troubled girls – all too reminiscent of those worrying times.”

“Great acting from a stellar cast”

“Intense and of its time but Roland was just a tad self-absorbed!”

“Terrific film! Bloody Roland with his ‘one size fits all’ set of beliefs at the root of most of the problems.”

“Roland will be in court again soon, aged 83, with Rosa giving evidence from behind a curtain!”

“An interesting film about an important moment but I did not feel Elle Fanning’s (Ginger) acting was entirely convincing. Period detail good apart from the sound quality of the Dansette record players!”

“One of those films that was padded out with too much dialogue and scenes that made it seem longer than it needed to be. Good thing the ending was solid. The pop/jazz soundtrack was a joy to listen to.”

“I enjoyed the soundtrack – the film was fine, too.”

“Good music but not much else”

“Ginger’s story was very engaging but the film was too self-conscious for me
Would have been better with more coherent dialogue. Very slow but great photography and music.”

“Imaginative setting for a rom-com. It caught the freeing-up of youth culture in the ’60s.”

“Over-acted by the ‘juniors’ but thought provoking about the role of women.”

“Filmed and told well I just hated the story.”

“I’m sorry but this was boring and pretentious.”

“Did this film know what it was trying ot say?”

“(The film) wandered lugubriously around, looking for a destination.”

“Took to long to warm up – unlike the room, which was far too hot. The music was OK but the parenting hopeless. Potter needed a better screenplay to make this film work.”

“Tedious and inconsistent. No more Sally Potter, thank you.”

“So that’s how you write bad poetry …. simple, really.”