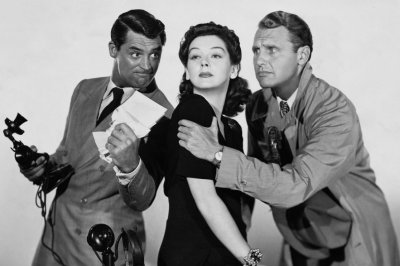 An adaptation of Ben Hecht and Charles MacArthur’s The Front Page starring Cary Grant and Rosalind Russell in this Howard Hawks masterpiece. Charles Lederer’s quick-fire dialogue will leave you breathless. Grant, an editor, is determined not to lose his star reporter Hildy Johnson, his ex-wife, to dim-witted rival Bruce Baldwin. To aid him, an innocent death row convict escapes into Johnson’s waiting hands. Lederer, never pausing for the viewer to catch up, infuses the film with a political and racial subtext. Sublime. (Cert U)
Dir: Howard Hawks 92 mins USA 1940

Tonight’s film has quite a chequered history. It started life as The Front Page, a very successful stage play of the 1920s, by Charles MacArthur and Ben Hecht. Then came its first transition to the silver screen in 1931, when Howard Hughes directed one of the earliest talkie successes to be nominated for an Academy Award. In 1940, Howard Hawks did a remake, with a new title, His Girl Friday, but with a sex-change for the star reporter, Hildy Johnson. This allowed for romantic misunderstandings to be added to the original cynical script. The role of Hildy was turned down by Ginger Rogers,Claudette Colbert and Irene Dunne amongst others, before Rosalind Russell emerged as Cary Grant’s bickering ex-partner.

Billy Wilder directed yet another remake of The Front Page in 1974, with Walter Matthau and Jack Lemmon but the critics were disappointed, finding the language coarse and the original plot largely jettisoned.

“Frantic, hilarious black farce with all participants at their best; possibly the fastest comedy ever filmed, and one of the funniest.”, Leslie Halliwell, Halliwell’s Film Guide

“Another triumph for Archie Leach! The best comedy we have had in B&W from that era. Rosalind Russell was the full works too.”

“Great! How did they manage to film such high speed wise-cracking?”

“Ensemble playing on speed. How did anyone [manage to] write that script?”

“Terrific – American politics do not change!”

“One of those solid comedies from Hollywood’s golden age. Packed with witty dialogue, a great story arc and some lovely comic chemistry from Cary Grant and Rosalind Russell.”

“Black humour in B&W – my ears were ringing and my head whirling. Most enjoyable.”

“This film was funny – and exceeded my expectations. Somewhat surprisingly, it has worn well. Over all, very enjoyable.”

“Incredible action and dialogue but relentlessly noisy and I got VERY sick of the telephones!”

“Brilliant dialogue but oh, that first hat and coat [she wore]! Reminiscent of the Mafia in the ‘20s.”

“Great comic scenes [but with] crowded and confused backgrounds”

“Great fun. A pity that some of the sound quality was variable.”

“Great if you have triple dichotic listening apparatus instead of ears! Good fun.”

“Subtitles would have been helpful at times”

“Very odd – slapstick humour coupled with a [near] suicide on screen. Hellz-a-poppin’ plus cod romance – [and] didn’t they smoke ?!”

“There’s a reason they don’t make ‘em like that anymore … Had a certain manic charm, I suppose.”