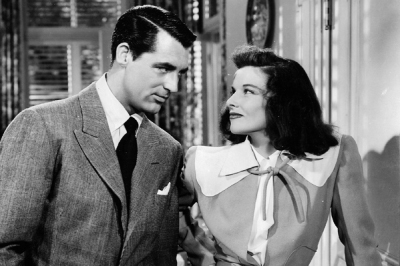 This influential film, with which Cukor expanded the rules for romantic comedy, has Johnny (Cary Grant) preparing to marry Julia, daughter of a wealthy Park Avenue family. But the more unconventional daughter, Linda (Katharine Hepburn), diverts his attention and has Johnny re-examining his intentions. The performances from Grant, Hepburn and Lew Ayres are electric – 50 years after its release, the film has lost none of its freshness. (Cert U)
Dir: George Cukor 95 mins USA 1938

“There’s no such thrill in the world as making money”, says Julia Seton, as she celebrates her engagement to Johnny. Johnny doesn’t mind making a bit of money, but there are limits, even if they test his relationship to his prospective father-in-law to breaking point and put his engagement at risk. Holiday has been described as a “a classic Depression-era screwball comedy”. What does that this mean? Wikipedia to the rescue:

“films considered to be definitive of the genre usually feature farcical situations, a combination of slapstick with fast-paced repartee, and a plot involving courtship and marriage or remarriage.”

Our film tonight certainly has the repartee and the enough of the required plot elements, but farcical? Slapstick? But what this screwball comedy has is depth, even in the very broadest sense, political depth. The attack on plutocratic and partriarchal values is made verbally by sister Linda (Hepburn) and often non-verbally by brother Ned. Incidentally, don’t just listen to Lew Ayres, make sure you really watch him, as he conveys so much silently.

George Cukor is known as a “woman’s director”, a rather lazy description he didn’t like. But he gave Hepburn a unique persona and, with her studio reportedly not knowing what to do with her, made her into a star.

“ … Cukor sees the glory in Linda’s rebellion, and the whole time that Linda and Johnny and their friends are in the playroom, everything feels transcendent. It’s a gesture towards utopia, a wholly convincing gesture …” (Dan Callahan, (sensesofcinema.com))

“Brilliant – they don’t make them like that any more. Principles and wit.”

“Delightful start to the New Year.”

“Surprisingly contemporary in its sentiments, I think!”

“Good fun but I found the idealism rather forced – then I never could stand Katharine Hepburn. Audrey, yes.”

“Did they talk that quickly to get it to fit the reels?”