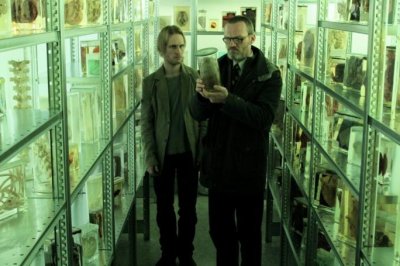 Stoical cop, Erlendur, investigates the murder of a local lowlife, suspecting links to the 1974 death of a little girl. He discovers a father hacking into the national DNA database, who is seeking answers about his own daughter’s death. The many strands are woven together in grainy detail to expose ‘the messiness of crime’. “The country is a small town over a big area, murder is rare, everybody seems to know everyone else, and although the motives are basic, the nature of it is at once modern and anachronistic. Those contrasts, that sense of place, make Jar City.” (eyeforfilm.co.uk) (Cert 15)
Dir: Baltasar Kormakur 93 mins Iceland 2006

Not a Nordic Saga as we know it, this film by Baltasar Kormákur presents a gritty picture of Iceland (pop. 320,000), clearly not made with the Tourist Board in mind. This is a murder story in which almost everyone knows about the crime and in which many could be considered suspects. Despite the pressures of his own difficult personal life, Detective Erlendur does not flinch in his determination to unravel, with touches of dark Icelandic humour, the complexities of the case. “A typical Icelandic murder,” he says, “shitty and pointless.” The Iceland shown is a prosperous high-tech place – the complexities of its DNA data-base form an important strand of the story.

Kormákur’s superficially unromantic view of the place is reflected in his previous film, 101 Reykjavík. In the words of that film’s tag line “30° below zero, five hours of daylight, what else can you do but get wrecked?”, it dealt with the drink infused culture of the city. Despite this evident cynicism about Iceland, his attachment to it and sense of its intrinsic beauty seem clear.

“Although the combination of council housing, greyish light and saturnine cop may remind audiences of British television serials such as Taggart, Z Cars or even the current Waking the Dead, many scenes in Jar City linger in the mind for their sheer weirdness, the sort of dry details that still distinguish good cinema from decent telly.” Jason Solomons, The Observer

“spectacularly beautiful cinematography that makes Iceland look like an extraordinary version of the end of the world” Derek Malcolm, This is London

“Impeccably acted – the eating scenes were brilliant. I hope I’ll be OK walking back [home] tonight!”

“Such a powerful and well constructed film – the other end of the spectrum from Agatha Christie!”

“Brilliant use of music”

The singing was lovely

“Iceland – a country with an impossible language and films with indecipherable and incomprehensible plots. I really enjoyed this one!!”

“A most interesting social reflection on Iceland and a better film than I expected. The DNA story aspect added a very modern dimension.”

“Many different strands and fascinating relationships. I enjoyed it – if that’s the word!”

“A solid and bleak crime drama with some beautiful choral to draw you into this complex storyline.”

“Gritty and realistic but I lost the plot on numerous occasions.”

“A bit hard to follow at times until we saw how the murder was committed – what the loss of your child can drive you to! Bleak scenery and bleak lives.”

“Nordic gloom [allied with] beautiful scenery – ingenious and enthralling. Reminded me of Wallander.”

“More interesting than Wallander, plus I thought Barry said it wasn’t funny!”

“This was not a film of unmitigated misery – there were actually quite a few laughs.”

“The story came together in the end – fantastic scenery.”

“Better than I expected. I always thought that the Nordic people were very clean-living. How wrong can you be?”

“The dead bodies were upstaged by the ghastly food! An atmospheric whodunit extremely well filmed.”

“Don’t go to Iceland, except for the [indecipherable – wind?]”

“Not a good advert for Icelandic tourism!”

“Clearly not made with a view to promoting the culinary delights of Iceland! Good fun.”

“Nice film for a village [sic] five times the size of Wales – with sheep and choirs as well!”

“Not how I imagined Erlendur.”

“A lot of brains but not very intellectual. I liked the music, though.”

“The food was revolting! If that is representative of the Icelandic people, they definitely are weird!”

“Haunting use of music [but] not an idyll. I wonder if Waitrose does sheep’s heads?”