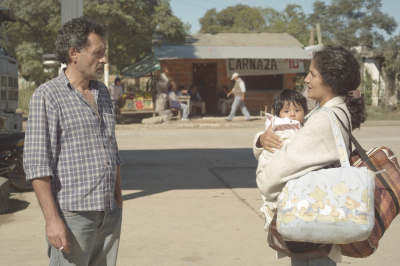 A great amount of non-verbal narration underpins this gentle and moving road movie from Argentina. Rubén, a long distance lorry driver who transports logs between Paraguay and Buenos Aires, agrees to take a passenger on one such run, but her baby of five months comes too. With stunning naturalistic performances from the two lead actors, they make their personal journeys of discovery. ‘A relationship movie, a road movie, a silent movie: Las Acacias is all these,’ Peter Bradshaw, The Guardian. (Cert 12A)
Dir: Pablo Giorgelli 83 mins Argentina/Spain 2011

Las Acacias focuses on a truck driver named Rubén who, on a routine journey in his truck, meets a hitchhiker named Jacinta. He gives Jacinta a lift to Buenos Aires, as he is travelling there himself. Whilst on the journey, Rubén realises that Jacinta is in fact carrying an 8-month old baby by the name of Anahí. The film focuses on the ‘journey’ they all take whilst going to their final destination.

Filmed within five weeks on location at Paraguay and Buenos Aires, Las Acacias is the feature length debut from Pablo Giorgelli, who previous work includes the 1993 documentary short, El último sueño. He describe his films, in an interview he did for the Eye for Film website back in March this year, as having the theme about family: “This one [Las Acacias] is about fatherhood… my own father and being a father”.

The film stars Germán de Silva, who has appeared in almost 20 shorts and feature films in a career of over 10 years. However, the rest of the cast mark their acting debut in Las Acacias, including Hebe Duarte, Nayra Calle Mamani, and Lili Lopez. Las Acacias has won 13 awards, including three at the prestigious Cannes Film Festival in 2011.

“… an absolutely beautiful movie that brilliantly captures the changing notes and cadences of a relationship through the smallest gestures between the often silent protagonists; entire sections of this unexpected treat resemble nothing so closely as a silent film” Mark Kermode, The Observer

“This is a short, sweet study of a man and a woman’s isolation from the world.” Justin, ShockYa.com

“At first, Las Acacias seems like it’s going to be dealing with immigration laws and customs in South America, but besides some topical details on the outset of their trip, this is quickly left aside. Instead, this is a neo-realistic exercise that could front as a documentary about human interactions in every day circumstances.” Nicholas Bell, ioncinema.com

“Not much reportedly happens for most of their relatively silent journey, but the payoff is rumored to be both surprising and extremely moving. I for one can’t wait to see where this tale takes me.” Nigel M. Smith, from the article ‘New Directors/New Films 2012: 10 Films Indiewire Thinks You Should See’, Indiewire.com

“Good – nostalgia without sentimentality, and the washed-out Dufay colour was nice.”

“Fascinating subject. The ship just kept going, as a labour of love the tattered, patched sails said it all.”

“Very interesting – pity about the commentary”

“An interesting chronicling of the transportation of China clay. Shame about the overpowering soundtrack and abrupt ending.”

“Background music too much in the foreground!”

“A bit too short not enough about the schooner. Colour strange. Accordion over-loud.”

“Enjoyed the pictures, endured the commentary but could not forgive the accordion, though!”

“An insight into an ex-sailing nation”

“The first and last colour film about working schooners?”

“Good that this sort of thing is recorded for posterity”

“Didn’t seem to know where it was going”

“Evidence of British industry in decline before Thatcher”

“Dull but anything with half-naked sailors in it can’t be all bad!”

LAS ACACIAS (feature)
“A gentle, elegiac film – fine acting without the need for much dialogue”

“Such a long journey, so little dialogue, nothing happened but they still fell in love. Brilliant.”

“A lovely, calm film, with the sound of the Scania Vabis engine as background. I managed to keep up with the plot this time!”

“Considering that there was no plot, it was amazing how this film held your attention!”

“Pinteresque in some ways – wing mirrors have their uses! I thought they were there to please driving test examiners.”

“Charming film – what a splendid baby!”

“A well-shot, gentle journey, with Anahi leading the cast.”

“An Oscar for Anahi – what a delightful film!”

“Give the baby an Oscar! If only the babies on Easyjet were as well behaved!”

“The baby was a wonderful actress!”

“The baby was the most communicative character for the first half hour. Good in places but too slow.”

“The baby was the star – who wrote her script? This was my second road film to-day (other one being On the Road) and I’ve never seen so many cigarettes smoked at one time! Ruben’s obvious feeling for Jacinta was a nice ending to the film. Interesting to note that that this was Nayra Calle Mamani’s [Anahi] acting début – she did very well.”

“A new and welcome twist on the road movie – thanks for the unsurprising detail that this was the baby’s début film!”

“A bit slow to start with but a charming outcome”

“A bit hard to believe – too many silences”

“Probably the most boring film I’ve ever seen!”

“Kept thinking “Are we nearly there yet?” Too slow but atmospheric, though. Refreshing lack of HSE rules in both films.”

“I’m looking forward to a holiday in Argentina! Brought a cushion – it saved my back. I’ll bring another for my bottom next time!”