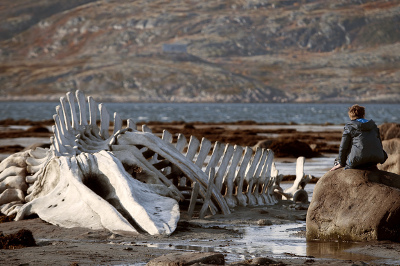 In this film of epic proportions, Zvyagintsev more overtly than in previous films, fires a critique at corruption in modern Russia. Kolia is a hard-working, hard-drinking mechanic whose home and livelihood are threatened by the Mayor, who wishes to acquire Kolia’s waterfront land which his luxurious new home will overlook. The soundtrack is taken from Philip Glass’ 1983 opera Akhnaten, whose visual and biblical references create an atmosphere of oppression. “The pleasure of the film lies in its forensic skill at unpicking the intersecting layers of governmental corruption and calumny that doom the working class from the outset. There would be no mistaking Zvyagintsev’s hitherto opaque political allegiances, even if one only had the target-practice scene to go on.” Ryan Gilbey, Sight & Sound. (Cert 15)
Dir: Andrey Zvyagintsev 140 mins Russia 2014

Director Andrey Zvyagintsev (The Return (2003), Elena (2011)) was inspired to make Leviathan after a real-life incident involving Marvin Heemeyer, who fought against the local authorities to stop a large manufacturing plant being built near his small business in Colorado, USA. The film can also be seen as a reworking of the biblical Book of Job.

Despite winning the Golden Globe in 2015 for Best Foreign Language Film, Leviathan lost out to Ida (2013) for the equivalent award at that year’s Oscars. However, it is currently featured in the popular 1001 Movies-You-Must-See- before-You-Die, edited by Steven J. Schneider (Quintessence 9th edition, New York, 2015).
Acknowledgements: IMDB.com, BlueprintReview.co.uk

“If there was ever any doubt as to Zvyagintsev’s position as one of world cinema’s foremost auteurs, it’s put to rest here. His filmmaking has always been superb but he’s never taken on the state of his nation in the way he does here. And that makes Leviathan not just masterful but also hugely important […]” Oliver Lyttelton, The Playlist

“This is the director’s most accessible and naturalistic film, using everyday characters to test how well modern-day Russia is maintaining the social contract with its citizens” Peter Debruge, Variety

“A searingly powerful picture of a corrupt and hypocritical society – as well as a brilliant story.”

“A passionate and anguished film”

“Predictably dark but a well made and compelling film”

“A future classic of Russian cinema, with its elegant cinematography, complex character arcs and stellar performances”

“No wonder Russian male life expectancy is only 59yrs! Echoes of Coen brothers. Perhaps an Orthodox bishop blessed the 210 Po!”

“A brilliant film but there were too many sub-plots.”

“I felt totally depressed by the film’s story – not ‘entertainment’.”

“A laugh a minute and several glasses of vodka! Depression and despair.”

“I would have cut half an hour from this film but I wonder how many of us went home and had a stiff drink.”

“I’m going to give up drinking now!”