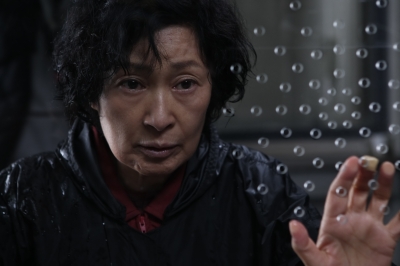 In this extraordinary film from South Korea, we are drawn into a murder mystery. A young man with learning difficulties is accused of a grisly murder and willingly confesses to the crime. However his mother (Hye-ja Kim), a force of nature, is determined to prove his innocence, against all the odds. The plot is labyrinthine and shows the inexhaustibility of the mother’s resolve. It is also a rare insight into South Korea, where both tradition and the ultra- modern exist side by side, as demonstrated by the visual impact of the golf course. (Cert 15)
Dir: Joon-ho Bong 124 mins South Korea 2009

Madeo is the fourth film from South Korean director Joon-ho Bong, who also made Barking Dogs Never Bite (2000), Memories of Murder (2003) and The Host (2006). With this complex film he again evades classification – apparently a thriller and murder mystery but with a much further reach into Korean society. The story is of a young man with learning difficulties (Bin Won) who is accused of the murder of a schoolgirl. His protective mother (Hye-ja Kim), who one suspects has had to get her son out of previous scrapes, is determined to prove Yoon Do-joon’s innocence at almost any cost. Casting Hye-ja Kim, a well known TV soap star, as the mother will have resonated with Korean audiences, and the mother-son relationship portrayed in this film has dark undertones.

Also contrasted is the plight of the single parent against male dominated authority – the police and lawyers are both incompetent and corrupt, respectively – but with whom she deals in her own indomitable way. But that doesn’t mean the mother will not employ a few tricks of her own, this matriarch is a force of nature.

The visual style of Joon-ho Bong is truly original, and the unfamiliar territory of South Korea is brought into sharp focus with the almost hyper-realism of the pristine golf course representing modernity and the simple every day lives and living conditions of working people.

“… it’s easy to get lost in admiration of the form, since Bong’s story construction and shot making certainly stand toe to toe with Hitchcock, Clouzot,or even Almodovar yet to do so would unwisely neglect the film’s specifically Korean context” Trevor Johnson, Sight & Sound

“Brilliant! We never really know what we would do for our children and let’s hope we never will!”

“Fantastic! No punches pulled [but I’m] glad she wasn’t my mum!”

“One of the best! A Greek tragedy in the Orestes tradition complete with the Chorus of Women at the end.”

“An excellent film and a gripping story”

“The things we get to know and wish we didn’t. A dark story, superbly acted and filmed.”

“A powerful portrayal of a mother’s grim, ultimately amoral, determination.”

“I was glad of the chance to see this Korean film. I thought the (thriller) plot turned out to be very ingenious but found it hard going having such an emotionally unstable character as the only point of identification. Some beautifully filmed shots. I guess that ultimately her remorse did give the film a moral centre, even if she did acupuncture herself back into a good mood!”

“Gripping from the start and almost unbearably sad at times. Excellent performance from Hye-ja Kim as the mother. A trifle over-long and I suspect some errors in the plot – eg, Do-joon never saw the rubbish collector, so how could he recognise him?”

“An excellent film with an intriguing plot. The best film of the season so far.”

“Superb – visually, as well as the way it was acted.”

“Even better the second time. A powerful thriller with unexpected plot twists and complex characters.”

“A bit grim but well done. Good subtitles for a change.”

“Clever, with twists and turns in the story. Good scenes of the [Korean] countryside. I enjoyed the connecting flashbacks.”

“Very well acted. A contorted plot with surprises near the end. I can do without Korean police and lawyers!”

“An excellent thriller packed with eerie music, gritty realism and certain proof that Korean cinema can inspire audiences outside its own borders.”

“I wasn’t sure that this was an accurate portrayal of the behaviour of people with special needs but it was powerful stuff nonetheless. I shall hurry home for several glasses of rice wine to recover!”

“Very interestingly filmed but not enjoyable at all!”

“Disturbing but needed too much suspension of disbelief to make it credible. Would have been improved by cutting 30mins from the running time.”

“Deeply unpleasant on many levels but strangely compelling: it kept my attention throughout. Very well made and imaginative.”

“I’m amazed I stayed to the end. I am really looking forward to next week’s film! [The Kid Brother]”

“I found it difficult to understand the expressions on Korean actors’ faces.”

“So Do-joon wasn’t such a retard as they all thought, after all!”

“From the slightly ludicrous to deep tragedy in half a reel!”