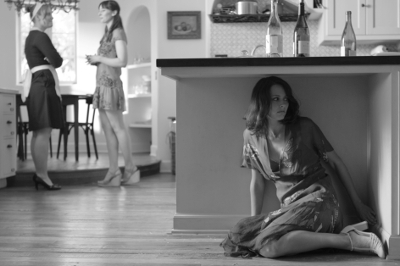 During post-production of his earlier 2012 film, The Avengers, Whedon brought together his group of actors to film Much Ado at his Spanish style California home. Shot in black and white on a tight 12 day schedule, it is set in the modern day, and is true to the original text. The central characters of Benedick and Beatrice bring to mind the screwball comedies of Grant and Hepburn, and are perfectly pitched, with intelligent performances from all the cast. “The actors understand the rhythms of the prose and the verse and speak it well.” – Philip French, The Observer. (Cert 12A)
Dir: Joss Whedon 109 mins USA 2012

Transplanted from medieval Messina to present-day California, tonight’s film is a word-for-word performance of Shakespeare’s enduring play. Director Joss Whedon had been sent by his producers on a post-production rest break following the shooting of The Avengers. Instead of relaxing on a beach, he got together with a group of actors known to him and, during a twelve day period, shot this black and white version of the play at his Spanish style villa in California. Although there are some awkward moments resulting from the shift in time and place, the essence of the play as a celebration of the adversity and duplicity that Beatrice and Benedick both overcome is captured fully, with the lovers joyfully united at the last.

“Joss Whedon’s California-set Much Ado, filmed in black and white over 12 days, is a charming and witty triumph” Phillip French, The Observer

“Within the first 10 minutes of Joss Whedon’s Much Ado About Nothing, I found myself smiling with excitement … would the magic hold? It holds from beginning to end” Sheila O’Mallet, Roger Ebert Reviews

“Great first film of the season”

“Brilliant – really enjoyed the modern take but I found the [USA] accents very hard to understand. Shakespeare not really made for American accents!”

“I have enjoyed Joss Whedon – since Buffy the Vampire Slayer and this was another delight. Witty and wonderful. It’s just a shame Alyson Hannigan wasn’t available, instead of Amy Acker!”

“Very enjoyable but the sound was a bit iffy for the first 10mins (difficult to hear).”

“An enjoyable first film but the first 15mins were almost incomprehensible – Shakespeare and USA English do not go well together.”

“Enjoyable but hard to catch the Californian accents.”

“With script that read like a Shakespearian rom-com and production values that harked back to Whedon’s low-budget work, the film was an oddity worth seeing for the career-high performance from Alexis Denisof.”

“Very clever and original adaptation, spoiled by poor American diction of the dialogue.”

“Enjoyable and well acted but the clarity of diction was not always good.”

“Great location and great dialogue but a pity it was spoken with an American drawl. Nevertheless, a good start to the season.”

“Difficult at first to relate to American accents and modern dress actors speaking the Bard’s lines but it developed a charming style and was an enjoyable comedy.”

“It must have been fun to make. The beginning was unclear (accents!) but it improved.”

“Difficult to hear because of the USA accents but well acted and funny.”

“Found the American accents difficult to hear and understand.”

“The plot was OK and the acting passable but the American accents were garbled and grating. Apart from that, not a bad start.”

“The scene at the beginning where Benedick left Beatrice after their session on the bed seemed at odds with the repugnance they were supposed to have for one another at that stage and so diminished the impetus of the plot (must be my 20th century mindset!). Also, the final scene was stereotypical Hollywood and seemed stuck on as an afterthought, the music for it being pretty unmemorable.”

“Dialogue a bit hard to follow, with its American accented Shakespearian English. Story was very silly but the photography and visual gags were both excellent.”

“Just didn’t work. Perhaps it would have been better if they had spoken more clearly. Lovely to look at, though.”