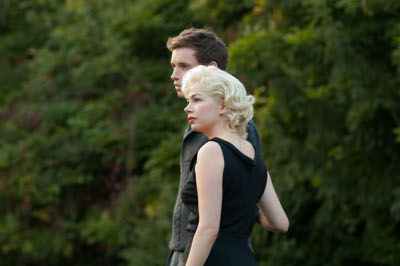 The young and perhaps naive Colin Clark, on whose memoir this film
is based, is taken on as studio assistant by Laurence Olivier, who is
directing The Prince and the Showgirl. He meets Marilyn Monroe, and
a delightful relationship ensues. By contrast, Olivier (Kenneth Branagh)
bristles in frustration with his leading lady. Michelle Williams portrays
Monroe most convincingly – a star turn indeed. (Cert 15)
Dir: Simon Curtis 95 mins UK 2011

The material for this film is based on two journals kept at an interesting time of tragic Marilyn Monroe’s career, when she came over to the UK to make the picture The Prince and the Showgirl in 1957 and rookie Colin Clark was given the difficult job of looking after the starlet and her husband Arthur Miller. The works were read by Simon Curtis who thought they could be turned into a film. With finance from Harvey Weinstein the project got under way in 2010 and premiered in 2011.

When Colin Clark (Eddie Redmayne) graduates from university, he goes to London to seek some work on the next picture by Sir Laurence Olivier (Kenneth Branagh). He is told there is no work going but insists on applying to Olivier himself, whom he once met casually at a party. Although Olivier is cold to the idea, his wife Vivien Leigh (Julia Ormond) encourages him to take on the young man unpaid – if he can show his worth by finding accommodation for Marilyn and her husband Arthur Miller (Dougray Scott). Wisely, Colin impresses the management by booking more than one location thus avoiding too much trouble from the paparazzi. When Marilyn arrives, she is also accompanied by her business manager Milton Greene (Dominic Cooper) and her voice coach (Zoë Wanamaker).

What follows is an insight into exactly how the doyens of British cinema treated Marilyn, and the difficulties she encountered working with them. When Miller decides to return to the States, Marilyn descends into breakdown and Colin finds himself picking up the pieces.

While featuring a stellar cast of British cinema talent, it is Michelle Williams’ performance as the tragic heroine that steals the picture and she was nominated for many honours and won a Golden Globe for ‘Best Performance by an Actress in a Motion Picture – Comedy or Musical’.

“A perfectly made gem – one of the best.”

“Stellar film with a stellar cast. How about The Prince and the Showgirl?”

“A week of dreams at the Dog and Duck!”

“Good performance by Michelle Williams but what an advantage in life an Eton education gives you!”

“Splendid cast, and doing it all so well.”

“Populist film-making at its crowd-pleasing finest. It had the right balance of comedy and drama and a cast to keep a Who’s Who of British and American screen acting fully occupied. It did make me want to see The Prince and the Showgirl.”

“Sweet story but cardboard characterisation – and what a luvvie-fest it was!”

“Great period piece. Could not have been done without the input of Wm. Shakespeare. Glad I had been to SpecSavers, so that I could read the end titles.”

“A lot to cram into a week – or into Michelle Williams’ dress!”

“A beautiful film with lovely music but I couldn’t always hear the words.”

“The two lead characters were excellent. First half not so professional, second half better.”

“Started off well but the second half was worse.”

“Never felt it quite involved me. Nicely done, though.”

“Did I spot an Austin Sheerline?”

“Can we have an extra row or two of seats closer to the screen, please, or I won’t be able to read the subtitles.”