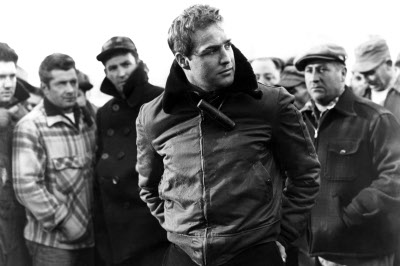 This Elia Kazan classic showcases the talents of Brando, Rod Steiger, Karl Malden and Eva Marie Saint. Terry Malloy, an ex-boxer, is now employed at the New Jersey dock where his brother Charley represents the powerful and corrupt workers’ union. Terry is the fall guy, helping to cover up the death of a worker who had testified against the union bosses. Kazan had himself testified at the House of Un-American Activities Committee and was accused of manipulating the sentiment of this film to justify his actions. However at the heart of the narrative is conscience, and how it may influence our actions. (Cert PG)
Dir: Elia Kazan 103 mins USA 1954

Terry Malloy is a casual worker on the 1950s New York waterfront. He was once a talented boxer whose career was blighted by a dubious decision in an important fight. Nowadays his main interest is his pigeons while earning a living on the waterfront as best he can. The dock workers are exploited in a highly corrupt work system where the Union acts as “fixer” in the informal hire and fire employment arrangements. Slowly he becomes embroiled in a conflict involving the Church, the Union and a government investigating commission. In addition he gets emotionally involved with the sister of a man who has been killed by Union thugs. The role of Terry’s conscience in his response to his situation is explored.

The film was made at a time when communism was seen by many in America as an “evil”, and it has been suggested that the director Elia Kazan’s own relationship with the House Un-American Activities Committee raised in his mind issues of conscience which are reflected in the film.

“On the Waterfront retains the freshness of an original – exploring the difficulties and corruptions of working stiffs with a realism, sensitivity and intelligence that has seldom been matched since”. Tom Coates, BBC.

“… It is undermined, however, by both the religious symbolism (that turns Malloy not into a Judas but a Christ figure) and the embarrassing special pleading on behalf of informers, deriving presumably from the fact that Kazan and Schulberg named names during the McCarthy witch-hunts” Geoff Andrew, Time Out.

“As powerful and political as ever!”

“I love this film more each time I see it. Marlon Brando was mesmerizing.”

“It ‘could be a contender’ for the number one film of the season!”

“As good as I remember it!”

“Magnificent – has lost none of its power since I saw it in 1955 – brilliant. Why did the ProgNote not credit Eve Marie Saint? Without her, there would have been no film.”

“An extra-ordinary piece of American cinema from an exciting era in film history. The acting was monumental, the music brilliant and the script was performed like classic literature. Sixty years on, this film remains a bona fide masterpiece.”

“A flawless Greek tragedy with a Hollywood ending”

“Gripping stuff but could have done with some subtitles! Great music.”

“All very black and white!”

“Not bad. You would have heard the dialogue better if some one had told Leonard Bernstein to belt up!”

“Music too loud compared to the dialogue”

“Leonard Bernstein was too loud.”

“Spoiled by poor sound. Note the hats! (The issues in New York reflected those in Liverpool in the 1960s, when I worked for employers in the docks industry. There were fierce disputes between the Blue [?] Communist dominated unions and the T&GWU, accompanied by the National Labour board’s system of recruitment of employment on a casual basis, resulting in instability on the waterfront. As Liverpool’s shipping declined , there was less employment in the 1960s/1970s)”

“Remember unions? If not, you need to see this film!”

“Not much about trade unionism”

“Marlon Brando’s eye make-up made him seem like beefier version of Julian Clary – but it was a brilliant film.”

“It was a relief when he finally changed his shirt.”