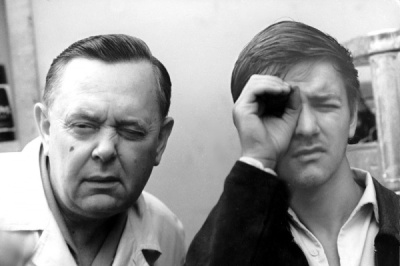 An early work by Milos Forman (One Flew Over the Cuckoo’s Nest). Teenager Peter drifts through life without direction or inspiration and now finds himself a trainee store detective. He meets Pavla and things begin to change. A gentle film about cross-generational tensions rather than grand gesture posturing, this is an affectionate and humorous tale of family conflicts of the new and old orders. “No messages here, simply an irresistibly wry and witty look at life’s little pitfalls, full of affection for every last one of the characters” (Tom Milne, Time Out). (Cert PG)
Dir: Milos Forman 85 mins Czechoslovakia 1964

Peter and Pavla was the director Milos Forman’s first feature film (he had previously made one short film “The Audition”), and a landmark in the Czech cinema’s own “New Wave” of the 1960s. Forman, Ivan Passer, Jan Kadar, Jiri Menzel were among a new generation of film directors who broke away from Socialist Realism and who developed their own unique styles within the existing corset of Stalinist censorship. Their styles were based not upon Hollywood, (access to American cinema was banned as “bourgeois” Western influence), but rather their styles and themes were grounded in observations of human relationships and life in modern Czechoslovakia.

In common with some Western films of the 1960s, the main theme of Peter and Pavla is “the generation gap” and the lack of comprehension between youth and the older generation. Sixteen year old Peter is in his first job as a trainee store detective in a supermarket. His pursuit of suspected shoplifters is conducted half heartedly. At home, he is hectored by his despotic father, which for Peter is merely a turn-off. He is attracted to a tomboyish classmate, but cannot seem to get his act together. Forman explores Peter’s confusion and lack of any positive commitment with gentle humour.

Whilst this theme might seem quite commonplace to modern audiences, the film nonetheless was the subject of some controversy at the time, despite carefully avoiding overstepping the Communist censors’ mark. Forman and his fellow directors pushed at the boundaries of a gradually liberalising censorship framework during the 1960s. That process reached a full flowering by the time of the “Prague Spring” of 1968. Forman’s last film to be made in Czechoslovakia was “The Fireman’s Ball” (1967), an allegorical satire. When Soviet forces invaded Czechoslovakia in August 1968 and removed the Dubcek government, Forman escaped to the USA. He went on to direct films such as “One Flew over the Cuckoo’s Nest” and “Amadeus”. RS

“I liked it greatly. Brilliant acting and direction of the actors. An excellent first film, which was commercially very successful in the UK in the 60s. Is there an album of the soundtrack available?”

“Introduction was informative and ~ right length but, even allowing for tongue-tied teenagers, I couldn’t follow most of it!”

“Very gentle portrayals of the characters but slow moving.”

“So little has changed with teenagers, then and now! The sub-titler (must have) had the same attitude to his work as Peter.”

“Gentle (but with) terrible sub-titles!”

“Very slow all the way through”

“Maybe of interest in the 60s but too slow and boring now – it hasn’t worn well. What actually happened?”

“Not sure if it ended naturally or (if) the film broke! Intermittently translated [ie, sub-titled] late or badly, I presume, or not at all made it difficult to get into. Mildly, sporadically amusing.”

“Well, we probably need one film in the season to make the others look good!”

“Poor film. Dreadful music – in contrast to Liverpool music at that time. No real theme.”

“Poor but interesting to have seen it.”

“Too much realismus for me! What a boring and pointless film … and those dreadful unsynchronised sub-titles!”

“Slow. Not a lot of interest. Needed better sub-titles.”

“The worst sub-titles for some time – just like the old days. Not even of historical interest. What have we done to deserve this? I suppose at least the credits were short.”

“Maybe we should wait another 20 years before the next Czech film is shown here!”