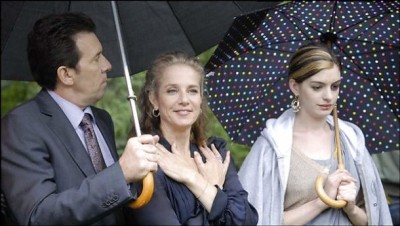 This story of a family reunited for a wedding at their rambling family pile in Connecticut. Shot in naturalistic handheld camera style, the viewer moves through the throng of diverse family and friends in just the way a guest might, and the family’s secrets and lies are exposed. “Those who surrender to Demme’s disarming, almost participatory technique will find themselves overwhelmed, exhilarated and inspired by the eternal possibilities of cinema.” (Tom Huddleston, Time Out) (Cert 15)
Dir: Jonathan Demme 113 mins USA 2008

There is much to recommend in this tale of a family brought together to celebrate the wedding of Rachel (Rosemarie De Witt) to Sidney (Tunde Adebimpe). Comparisons could be made to acclaimed films from directors such as Robert Altman (Gosford Park) and Mike Leigh (Secrets and Lies), as Jonathan Demme uses a naturalistic style and ensemble cast to tell this story of a ethnically diverse family preparing for the above mentioned nuptials in their genteel and rambling home in Connecticut. Demme employs the skills of editor Tim Squyres, who also worked on Altman’s Gosford Park, and the viewer is drawn into the wedding and house party throng as the camera weaves its way from room to room. The central story is that of sibling Kym (Anne Hathaway), who is a recovering addict who has been allowed home to attend the wedding, and whose demons are revealed as the story unfolds. It is also the debut original screenplay from Jenny Lumet (daughter of director Sydney Lumet). The dishwasher episode, Jenny Lumet revealed later when interviewed, was based on a real life event at her father’s house!

“The rules say that critics don’t discuss movies after screenings. After I saw Demme’s Rachel Getting Married for the second time, however, a friend asked: ‘Wouldn’t you love to attend a wedding like that?’ In a way I felt I had” Roger Ebert Chicago Sun-Times.

“Great to have a short again – more please!”

“I enjoyed this film.”

“I liked this – it was interesting and playful.”

“Had some solid and sound design, even though the plot didn’t seem that developed.”

“A lovely idea. Did they build a hut on the Magic Mile of the beach? It was nice that the continuation [of the story] had to be guessed.”

“An original concept but not much of a story.”

“Ambitious but a bit self-conscious”

“I didn’t understand it.”

“Well, what was that all about?”

“I’m so glad I came! Powerful and sad – wonderful film-making.”

“Brilliant acting, [with] a lot of tension. [I thought] I was the only one with a PhD in dishwasher packing!”

“Colourful, lively, well acted, well filmed and amusing but [too] long. Puzzling in its meaning but perhaps

that was too obvious – a long vehicle for not too much [content].

“Good and well constructed, if [too] long but what a lot of superstructure around a ceremony that boils down to ‘He does – do you?’ ”

“A quirky film with some catchy music”

“How thin is the veneer of happiness in family life!”

“All too excruciatingly real!”

“Just goes to show [that] no family is entirely perfect but it was nice that the weather turned out OK.”

“Seemed too long but still had warmth and charm with a capacity to overcome the difficulties experienced by the family from the past.”

“How very American – perhaps, like most weddings, you needed a stiff drink!”

“Amazing. Unbelievable extremes with too much of everything, especially the wedding. In between, some fine spells but overall [impression] confused and confusing. Tedious at times and hard to grade.”

“Not bad once it got moving but for a long time it seemed to be little more than a ‘feel-bad’ movie consisting of lots of prolonged bickering. Plenty of good bits but [it] should have been shortened.”

“Incomprehensible at the beginning, too long and boring at the end. I think there was a bit in the middle that I enjoyed.”

“The hand held camera-work made me dizzy and gave me headache. Dialogue mostly American mumbling – subtitles would have been useful!”

“Subtitles would have been useful!”

“One good thing about a family is that it forces one to meet people one wouldn’t dream of meeting otherwise. I didn’t think this extended to other people’s families, however. I’m with Philip French on this film – after an overdose of schmaltz, a few AA meetings seem quite attractive.”

“The ladies were incomprehensible to me but had wonderful teeth!”