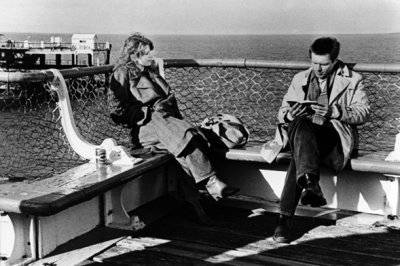 An unconventional and loosely narrated road movie, made with the support of German director Wim Wenders, in which Robert B, hearing that his brother has died, drives from London to his Bristol home. Misunderstood when first released, it can be seen as a metaphor for the state of the British film industry. “a subtle, masterfully understated meditation on late 1970s Britain” – Rhys Tranter. With music from Wreckless Eric, Kraftwerk and David Bowie. (Cert 18)
Dir: Christopher Petit 100 mins UK 1980
to be shown with
AUSGETRÄUMT Artists’ Cinema
Dir: Deimantas Narkevicius (Cert U) 6 mins Lithuania 2010

Re-released in cinemas in 2004 for its 25th anniversary, writer-director Christopher Petit’s first feature is a sombre monochromatic road movie set in Britain in the 1970s. The film’s style owes much to the German director Wim Wenders, who acted here as associate producer.

Robert (David Beames), a gloomy factory worker, drives his battered old Rover from London to Bristol in order to investigate the mysterious suicide of his brother. As he travels through desolate urban and rural landscapes, he has random encounters with other loners, including an army deserter, a garage mechanic (played by Sting) and a young German woman Alice, searching for her child. Robert’s dialogue with these people is sparse. In the end, the mystery of his brother’s death is unresolved. The film’s soundtrack has an almost all-pervasive music which plays from the car stereo, transistor radios and pub jukeboxes, including tracks by David Bowie, Kraftwerk and Wreckless Eric.

The film presents a bleak picture of Britain at that time: of alienation, failure of human communication and a disenchantment with modern living. A poster on the wall of Robert’s brother’s flat is Kraftwerk’s mission statement (“…our reality is an electronic reality”). This could apply to the world outside. Despite being set in the now distant 1970s, it does not take a great leap of imagination to feel uncomfortable echoes in 21st century consumer Britain, where electronic noise drowns out and sometimes replaces human communication. David Beames’ understated, unemotional performance sustains the film’s mood of oppressive bleakness.
RS

“Excellent soundtrack. Some of the shots of nothing happening went on too long – especially in the opening sequence – but a great film even so.”

“The past is another country – and one that looks pretty much like Lithuania in the present. Quite liked the grungy aesthetic but, in the absence of any plot, would have preferred some sense of the ‘state of the nation’ that only came through from the incident with the soldier. Actors who could act would have helped – although [Lisa] Kreuzer [as Ingrid] was excellent.”

“Had a killer soundtrack, which made me want to hear more of that kind of music. The introduction gave food for thought on the use of music in contemporary life.”

“Two films which merged together.”

“In many ways, nothing changes and everything stays the same. A strangely satisfying film.”

“The grey sadness [was] quite overwhelming – unexpectedly so.”

“OK, it’s bleak but bleak is good in movies – it makes you appreciate that there’s always some one worse off than yourself.”

“The key to understanding ‘bleak’ is not to look for too much overt meaning! I loved the music and the fact that [the film] was road movie. Very evocative of its time. Dismal – just pre-Thatcher!”

“Not even sure it hung together but a nice reminder of my youth.”

“Never [got] out of second gear but it was good to see petrol at £1.00 a gallon and clear motorways!”

“A valuable antidote to ’70s nostalgia”

“I think I got more out of the short than the feature! Bleak expectations but fascinating to see common items of the time and the products we ‘enjoyed’.”

“Tiresome soundtrack, undistinguished visuals. A road movie is all very well but the road has to go somewhere!”

“What a weird film!”

“The film said – What is the point? And of the film I say – What was the point?”

“That was the longest 100mins I’ve ever sat through. Bring back Little Miss Sunshine!”

“To call it slow implies a redefinition of the word!”

“Incomprehensible when the ‘music’ was on – barely much more when [it was] off.”

“Could not have happened with satnav. That Rover had a tractor engine!”

“The most depressing film of the year so far!”

“Some one said to me, as a recommendation, ‘You won’t see this film anywhere else’. Good news … ??”

“Having missed last week’s film, I was hoping for something better but should have gone to the pub. Next week perhaps … ?”

“At last, [a] short that did not try to be to pretentiously clever!”

“Better than the last short.”

“Atmosphere captured everything there is to know about small town Lithuania – which seems very like ’70s Britain.”

“I loved the atmosphere [and] was moved by the youthfulness of the rock band.”

“I enjoyed the music.”

“Made an interesting ‘art-house’ equivalent of a music video for a contemporary Indy band.”

“Did they get money for this? I could hold a camcorder by a car window.”