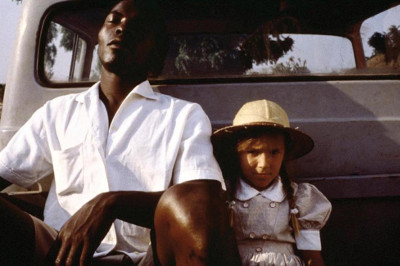 This was Claire Denis’ debut film, in which her protagonist France Dalens, revisits the Cameroon of her childhood. France is the daughter of French businessman Marc and her beautiful mother Aimée. They live a life of comfort and privilege, but also seclusion, with their houseboy Protée and other African staff. Denis subtly conveys the inequalities of colonial Africa, using the undoubted frisson between Aimée and Protée to express the repression. (Cert 15)
Dir: Claire Denis 105 mins France 1988
Introduced by Dr Ann Miller, formerly of the Department of Modern Languages, Leicester University.

Chocolat
France 1988 105m Cert 15
Introduced by Dr. Ann Miller, formerly of the Dept. of Languages, University of Leicester
France Dalens, a white Frenchwoman in her late twenties, arrives in Cameroon to revisit the locale in which she had lived as a child. The man who gives her a lift to her destination assumes she is just another tourist. However, when the film goes into flashback we see her as a little girl, the daughter of a French colonial officer. France remembers a particular set of events in and around the household. All the servants are black. One of them is the houseboy Protée, who is of a similar age to France’s mother, Aimée. Their relationship is the central plot driver.

* Born Adolph Brand in South Africa in 1934 and previously known
as Dollar Brand, Ibrahim is a well established musician/composer who has worked with some of the biggest names in modern jazz, as well as on other Claire Denis films.

“Absorbing gentle analysis of relationships in a colonial context”

“I would need to see this film a second time to appreciate the sub-titles. Very helpful to have had Ann Miller’s intro. and discussion.”

“Whilst there was plenty of scope and substance to the film, the lack of connectivity between past and present may make repeated viewings none too special. At least Ann’s talk gave us points to look out for.”

“The main part was well observed but quite clichéd.”

“Interesting and slow-burning. Another case of what the young France saw how the blacks and whites got on together – fear, resentment, arrogance, loathing.”

“Disjointed and not really engaging enough”

“Interesting but a bit slow”

“A wonderful donkey – but not much else! A poor man’s Out of Africa.”

“The discussion was too long.”