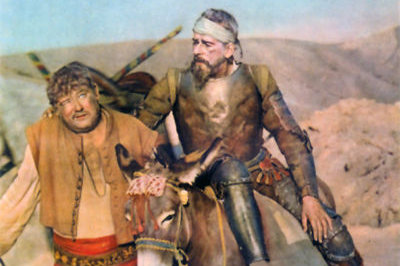 This is the rarely seen Soviet version of the Cervantes novel, made by the director of the renowned Russian Hamlet. The source novel is generally considered a great challenge to filmmakers, but Kozintsev homes in triumphantly on the two men’s odyssey. “Nikolai Cherkassov and Tolubeyev (as Sancho Panza) are magnificent, respectively, as the gangly, naive and idealistic knight errant and his loyal friend and servant. Witty, elegant and touching” – Geoff Andrew in Time Out Film Guide. (Cert U)
Dir: Grigori Kosintsev 102 mins USSR 1957

Tonight’s screening will be introduced by John Riley, expert on Russian and Soviet films, making his sixth visit to ABCD.

Don Quixote, the classic novel by Cervantes, has served well as the basis for music and the performing arts. There have been operas by Giovanni Paisiello, Jules Massenete, and, for puppets, by Manuel de Falla. There was a Russian ballet, choreographed by Marius Petipa and with music by by the Austrian composer Ludwig Minkus, and a tone poem by the German composer Richard Strauss. On the filmic side there were the 1933 English, French and German films made by Georg Wilhelm Pabst starring Fedor Chaliapin, George Robey, and Renée Valliers. Only 55 minutes of the English version remain, and it was a rather bleak adaptation, with Chaliapin playing the title role as a grotesque emphasising the madness. For the film, Jacques Ibert wrote the score including a rather nice set of songs for Chaliapin, the last of which runs over a very neatly ambiguous closing sequence. The film shows what a stylish film maker Pabst was. In 1973 Rudolf Nureyev and Robert Helpmann directed and starred in a film of the Petipa and Minkus ballet, based on the 1902 version by Alexander Gorsky for the Bolshoi Theatre. In 1965 Dale Wasserman, Mitch Leigh and Joe Darion produced the hit stage musical Man of La Mancha and this was made into a film in 1972 by Arthur Hiller. Terry Gilliam is attempting to finish a film called The Man Who Killed Don Quixote by 2011. He was forced to suspend production in 2000 due to the death of his lead actor, Jean Rochefort. Coincidentally, Orson Welles unfinished modernistic adaptation suffered the same fate with the death of his star Francisco Reiguera in 1969.

In between times, in 1957 Grigori Kozintsev, who also did successful adaptations of Shakespeare’s Hamlet and King Lear, produced this marvellously sensitive and quintessential film. Kozintsev’s film concentrates on the episodic odyssey of Don Quixote and his serf Sancho Panza rather than on the bulk of the novel, in which Cervantes parodied the chivalric literature of the time. This is indisputably the best of all the films, for not only does it closely follow the spirit of the tales but the locations in the Crimea, as filmed admirably by Andrei Moskvin, are typical of the arid Spanish plains where the action is set. Nikolai Cherkasov, whom we have seen before in Ivan the Terrible, and Yuri Tolubeyev give great performances in their portraiture,respectively, of the idiosyncratic knight and his faithful servant.

Cervantes’ novel has been translated into all major languages and has appeared in 700 versions. The influence of the novel can be seen in the works of Smollett, Defoe, Fielding and Sterne and in the great novelists of the 19th Century, including Dickens, Flaubert, Melville and Dostoevsky, and later James Joyce and Jorge Luis Borges. There was a copy of Don Quixote in the Bodleian as early as 1605 and it was first translated into English by Thomas Shelton, but not published until 1612. The second volume, written in 1615, was published in 1620. It is thought that Shakespeare had probably read Don Quixote, but it is doubtful that Cervantes had ever heard of him. Strangely both Shakespeare and Cervantes died on 23rd April in 1616, but in Shakespeare’s case this was in terms of the Julian calendar and so was the 3rd May by the Gregorian calendar, in use in Spain since 1582 and the calendar we now use.

For the sixth time, we welcome John Riley to introduce and discuss tonight’s film. John is an author, lecturer and broadcaster, concentrating on Russian and Soviet film and music. His publications include Dmitri Shostakovich – A Life in Film and Discover Film Music. John wrote, directed and produced Shostakovich – My Life at the Movies, which was premièred at the South Bank Centre by the City of Birmingham Symphony Orchestra, with Simon Russell Beale, and has also been produced at the produced at the Komische Oper, Berlin, with Ulrich Matthes.

“This film had so many truths in it. The story was wasted on me while I was at school!”

“What a splendid Don Quixote! I loved the court scenes. Fascinating scenery.”

“Beautifully done. A strange, sad, funny story I read parts of as a child [but] no more since then. I enjoyed the film.”

“A beautiful film. The colour did a lot for it and gave it an almost romantic aura. Great humour and pathos combined.”

“Really charming and enjoyable – nice casting (Don Quixote = Neville Chamberlain by El Greco?). The political interpretation [could be that DQ was shown] as an honest Soviet man, naïve and idealistic, versus wicked bourgeois/aristocratic privilege. However, the interpretation could be that [he was] a Russian Everyman [standing up] against a corrupt Stalinist regime – by 1957, this too would be OK. Very painterly – they certainly studied the Spanish masters.”

“An entertaining adventure, which featured [some] dramatic music and a sublime performance from Tolubeyev.”

“Very enjoyable though perhaps a touch ‘slapsticky’ for me at times, in tone if not in content. It did not feel remotely like a Russian film – though I have no specific image in my mind when I say that. The ambiguity was very well caught, [so that] you did not know if he was hallucinating or if he was the only one seeing the truth.”

“Some beautiful photography – pity about the wobbles on the print. As John Riley [the guest speaker who introduced the film] said, a bit static.”

“An enjoyable adventure film but does he get the girl in the end?”

“What a mixture – from [illegible] too many decibels to romantic near silence. Clever and moving at times but overpoweringly uproarious at others. Weird for 1957! It had an unfinished feel, somehow. PS: It’s cold in here!”