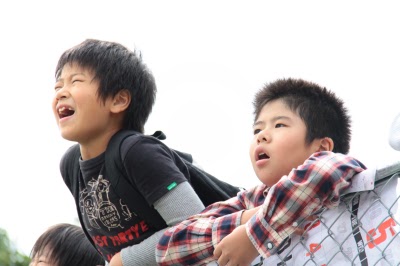 Kore-eda coaxes wonderful performances from two young, real life brothers Koichi and Ryunosuke. Their parents’ separation has resulted in their separation, too. Keeping in touch by their mobile ‘phones, they plan how they can be together again. A new bullet train is to be built which will link the distant towns in which they now live. Their imagination and hopes are drawn to the urban myth that when two bullet trains cross, a strange mystical energy is created enabling wishes to come true. “… it’s hard to remember a better film about pre-teen life than I Wish” – Tom Huddleston, Time Out. (Cert PG)
Dir: Hirokazu Kore-eda 123 mins Japan 2011
We welcome back Alex Jacoby, expert on Japanese cinema, to introduce this film. Event starts at 7.30 p.m.

with introduction and discussion by Alex Jacoby, Oxford Brookes University

We welcome all our guests and members to tonight’s special event. We also welcome back Japanese film expect Alex Jacoby – currently a Senior Lecturer in Japanese Studies at Oxford Brookes University – to introduce I Wish from director Hirokazu Koreeda (Nobody Knows (2004), Still Walking (2008), After Life (1998)).

I Wish takes place in Kagoshima, in which a boy named Koichi, played by Koki Maeda, lives with his mother and his grandparents. He misses his brother and father, and wants his family back together again. To his pleasure, he hears about a legend where a wish can be granted when two bullet trains pass each other. He brings his friends, Tasuku and Makoto, to the spot where two trains pass each other. The film then follows what happens after Koichi encounters the bullet trains, along with his brother and friends.

“Koreeda does extraordinary work with his young cast, who deliver gentle, natural performances in a beautifully told story of heartbreak and hope. Deceptively modest and utterly lovely, it’s one of the most magical films about childhood I have ever seen.” Elizabeth Weitzman, New York Daily News.

“The vignettes are linked as much by theme as story, yet they’re carefully structured and delicately balanced.”
Mark Jenkins, The Washington Post.

“The brothers Maeda are pure gold; the film captures what feels like effortless joy in their lives, and it is never something they seem to be reaching for.” Roger Ebert, Chicago Sun-Times.

“A charming story – I loved the improvisational style.”

“An optimistic film with such peaceful aspirations. Interesting contrast with Stand by Me.”

“More like a slice of contemporary Japanese childhood than well grounded family drama. The soundtrack was nice too.”

“Charming but a little too long”

“Interesting but not quite satisfactory – I’m not sure why!”

“A sort of yellow-brick train experience but ca. 30mins too long. Why do Japanese films have to have so much in them? Food-wise, a bit like Tampopo.”

“Too confusing about who was who and very slow moving.”

“Some nice touches but too many slow patches. Needed a good editing.”