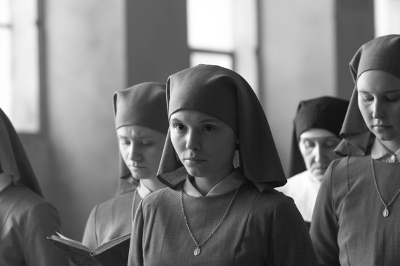 This is the first time Pawel Pawlikowski has set and made a film in his native Poland. Anna, an orphan taken in by a convent, is now about to take her vows. But when the mother superior tells her she must travel to meet a family member, an unravelling of Polish wartime history ensues. Anna meets her unconventional aunt Wanda, and together they travel to discover the secrets of their lost family. The cinematographers’ use of 4:3 aspect ratio has a stunning effect. “…Pawlikowski has shown an unwillingness to be constrained by commercial or editorial pressures, and demonstrated a particular affinity for exiles and outsiders …” Michael Brooke, Sight and Sound. (Cert 12A)
Dir: Pawei Pawlikowski 82 mins Pol/Den/Fra/UK 2013
We welcome back Hubert Zawadzki, co—author of A Concise History of Poland (CUP, 2001) to set the historical background to this film.

Tonight’s film, set in Communist post-war Poland, will be discussed by Hubert Zawadzki, co-author of A Concise History of Poland (CUP 2001), placing it in its historical background.

Ida, who has been living in a Polish convent for many years, is now about to take her final vows. Before this happens, she is instructed to visit her one remaining relative, of whose existence she had not previously known. The relative, her aunt Wanda, whose lifestyle is not exactly what the Mother Superior would wish for Ida, and Ida form a strong bond and explore their family history, which seems to represent a telling of important parts of recent Polish history, as it affected – and perhaps arguably still affects – individuals. Along the way, Ida has some interesting episodes that would have eluded her had she not made this excursion from the convent. (To say more about the plot might spoil its dramatic effect.)

Does reading the film politically and historically distract us from the personal story? The critic quoted below thinks it might but we shall have to make up our own minds. Is there a conflict, or could it be that these two aspects re-inforce each other?

“Pawel Pawlikowski’s thoughtfully minimal Ida is wholly engrossing throughout its scant runtime. Lurking just below the surface of its minimalist design is a language that explores its protagonist beautifully, telling more about her with a wordless and excellently framed static shot than any dialogue could reveal”
Williamson Balliet, battleshippretension.com

“An awesome film and a most sensitive [sic] talk. All our thanks to Dr. Zawadzki”

“Beautifully made and acted.”

“Brilliant film and contributions from Hubert”

“Beautifully made, sombre film. Open to (many) interpretations.”

“Beautifully paced. Apart from Ida, anyone not guilty?”

“Great atmosphere – of the drabness of Communist Poland. I liked the way Ida’s and Wanda’s backgrounds were unravelled. For Ida, it can hardly have ended there.”

“Very powerful and beautifully portrayed. It worked so well in B&W, which created the starkness of the scenery.”

“Powerful and well told with additional background from our speaker. Excellent scenes and cinematography.”

“Whilst its simplistic narrative may have been lacking for some first-time viewers, the film had some lovely cinematography that captured the period with conviction. Hubert Zawadzki’s depth of knowledge provided interesting and engaging insights into the film’s historical context.”

“Not exactly Maria von Trapp but a more moving and poignant tale. Good use of B&W and Academy aspect ratio.”