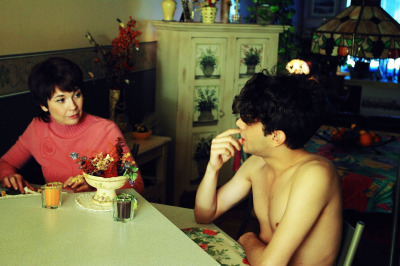 Xavier Dolan was 19 when he made this accomplished film, which was
awarded three prizes in the Directors’ Fortnight at Cannes in 2009.
Hubert, played by Dolan, is a gay young man at war with his
domineering mother, and their furious exchanges have the power of
missiles. “The film’s strongest element has to be the scenes between
[mother and son], with their fierce confrontations an illuminating
insight into an adolescent perspective on life and the traumas of
growing up.” Patrick Gamble, Cine-Vue. (Cert 15)
Dir: Xavier Dolan 96 mins Canada 2009
We welcome Dr Ann Miller, formerly of Leicester University
Department of Languages, to introduce this screening, which will
begin at 7.30 p.m.

Dolan, described as a “petit génie d’un nouveau cinéma québécois” (www.abusdecine.com), made this “semi-autobiographical” film when he was twenty. It went on to win him three awards in the Directors Fortnight at Cannes in 2009, together with an eight minute standing ovation.

It’s the story of 16 year old Hubert, a gay teenager in contemporary Montreal whose relationship with his mother is, as they say, somewhat stormy. Additional tensions arise from the fact that his divorced father only shows interest in him a couple of times a year. Hubert tells his teacher that his mother is dead. On discovering that this is not so, she says: “You killed your mother”. In response to the crisis in their relationship Hubert’s mother (and father!) decide to send him to boarding school.

The director subsequently made Heartbeat (2010) and Laurence Always (2012), the latter being picked up for British distribution. He has 14 screen credits as an actor, the earliest in a 1994 TV movie.

We are very pleased to welcome Ann Miller to introduce our screening and then to lead a discussion afterwards. Ann was in charge of modern language teacher training at Westminster College until 1996 and then took up a post in the Leicester University Department of Modern Languages. She has visited us annually since the late 1990s.

“Astonishingly well done by the director and his cast.”

“Great complexity and a very accomplished movie from a talented youngster. Very sophisticated screenplay and shocking, though credible, scenes thanks to good performances.”

“Ann Miller was excellent as always.”

“An excellent Canadian melodrama, with two stellar performances and enough imagery to keep the film open to many interpretations.”

“I think that any parent could relate to the relationship between Hubert and his mother.”

“Purgatory personified! What a performance!”

“Film was well done and interesting but, not surprisingly, somewhat self-indulgent.”

“Some good things but too long and too self pre-occupied! This from an old man responding to an adolescent story!”

“Some good one-liner sarcastic remarks but the tirade against the boarding school headmaster was a tour de force!”

“She should have sent him to boarding school in the first place!”

“Too many ‘half-symbols’ perhaps but enjoyable, I think. Maybe the film-maker was unsure of his intentions? How well did the poetry integrate?”