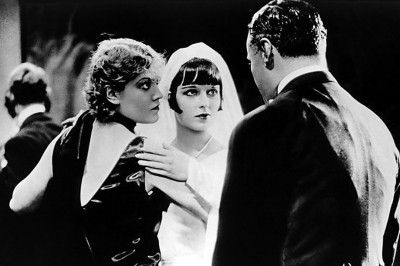 with piano accompaniment by Wendy Hiscocks

The star of the film is the American Louise Brooks, 1906 – 1985, who also featured in Pabst’s Diary of a Lost Girl (1929), shown by ABCD in 2008. “After these two films for Pabst, this ex-Ziegfeld Follies girl known for liking a good time but also for reading Schopenhauer between takes went back to America and began a tragic slide into destitution. […] Brooks found in Franz Wedekind’s Lulu, renamed Pandora’s Box by Pabst, the perfect expression of her beauty and eroticism; it was much more intelligent than the parts she had to play in Hollywood. Many think the part chased her for the rest of her life. In fact, once rediscovered [in the 50s], she became a writer and critic of some note before she died in 1985. Pabst made sure that Brooks was pre-eminently Wedekind’s idea of Lulu – a beautiful innocent who passively accepts her sexuality and causes the weak men who adore her to self-destruct. She is the prostitute as scapegoat, tragic but with no sense of sin …”(Derek Malcolm, The Guardian, 1999).

Pabst, 1885 – 1967, directed over forty films between 1923 and 1956, with many of the pre-WW2 ones, such as tonight’s, still very highly regarded. These include The Threepenny Opera (1931, screened in Abingdon in March 2000), Comradeship (1931), Westfront, and Joyless Street (1925, starring Greta Garbo and Asta Nielsen). These famous films often took a leftwing political stance – Comradeship, for example, is an anti-war film celebrating German miners racing across a border to help in the rescue of French pitmen following an explosion. In the 1930s Pabst worked in France and the USA, but returned to Germany and worked there throughout the war.

Our accompanist this evening, Wendy Hiscocks, is an Australian concert pianist and composer. She has visited ABCD on several previous occasions, including presenting an excerpt from a restored version of Alice in Wonderland (1903 version!) for which she had composed and played accompanying music. She has also twice played four hands duets in tonight’s venue (with Andrew Youdell and Anthony Gray). She is a regular at BFI Southbank (aka the National Film Theatre) and accompanied Pandora’s Box at the Welsh National Opera in Cardiff last year, in association with a season of operas by Alban Berg.

The film is drawn from the two Lulu plays of the German dramatist, Frank Wedekind, 1864 – 1918, Earth Spirit (1895) and Pandora’s Box (1904). His first play, Spring Awakening (1891), caused considerable scandal in Germany. It’s perhaps ironic that the casting of Louise Brooks in Pandora’s Box some thirty years later scandalised many – seen as “not an actress” and untrue to the spirit of Wedekind.

We would like acknowledge the warm hospitality of Saint Nicolas Church in allowing us to present tonight’s film. In particular many thanks to Jim Barker and Geoff Currey.

“Pianist brilliant – such stamina. Film far too long and not suitable for piano-only accompaniment. Still, I’m no expert – what do I know ??”

“For its time, it was special!”

“Good for its time – the last act was brilliant.”

“Despite being a bit too long for its own good, this film remains a solid piece of dramatic entertainment thanks, in part, to the gorgeous lighting and Hiscocks’ submersive music.”

“Some people need a long time to tell their story. The character of the old father was splendid.”