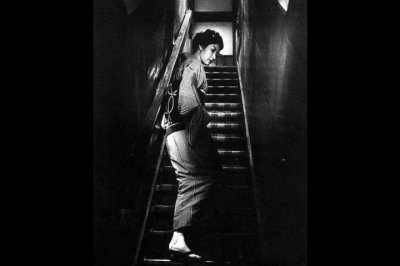 Only released in the UK in 2007, this 1960 classic of Japanese cinema by Mikio Naruse has insight into attitudes towards women in Japanese society. Widow Keiko has to decide whether to find a new husband or work as a hostess in her bar. Choosing the latter, Keiko endeavours to rebuild her life alone. Naruse depicts this with warmth and humour. (Cert PG)
Dir: Mikio Naruse 106 mins Japan 1960
We are pleased to welcome back Japanese cinema specialist Alex Jacoby to introduce this screening, which will start at 7.30 p.m.

Tonight’s screening is introduced by Alex Jacoby, who lectures in Japanese film and language at Oxford Brookes University. He has lived in Japan and has published widely on Japanese cinema. He visited us last season to introduce Mizoguchi’s Ugetsu Monogatari and we are delighted to welcome him back to Abingdon.

Whereas last year’s Japanese film was set in 16th century, war-riven Japan, tonight’s is set in postwar 20th century urban Japan. Keiko, a widow, played by Hideko Takamine, works as a bar hostess in Tokyo entertaining businessmen after work. She must decide whether to seek a husband or to pursue her dubious career.

The director, Mikio Naruse, is not a familiar name in the UK. Tonight’s film only achieved its first release in Britain three years ago, yet but Naruse was born in 1905 and IMDB credits him with 77 previous films and 11 subsequent ones. He died in 1969.

“Alex is brilliant – let’s invite him every year!”

“An intelligent and stylistic melodrama which provided a good example of Naruse’s legacy for future debates on the art of film. Alex’s critical take on Naruse will certainly encourage [this] film novice to check out his other films.”

“Such an emotional journey but very beautifully acted and filmed.”

“Beautifully made but was it too long? I’m not sure.”

“A beautifully told story about a woman ‘of no substance’. Whatever she did, there was always a ‘kick’ around the corner. Well acted and very well directed. Now I need a drink!”

“An interesting social document, as well as a compelling story. What a delightful leading lady!”

“A clever lady with integrity and a strong will – nearly!”

“What a lot of conversation about people who weren’t there … and quite hard to get hold of names and relationships at first. Good film, though.”

“It got more interesting and focussed in the latter half. Plot rather like An Education.”

“A little slow getting started”

“She didn’t have lucky face you’d have to admit!”

“Basically, Far Eastenders! which is not meant to suggest that Eastenders, or this film, do not cover human drama well.”