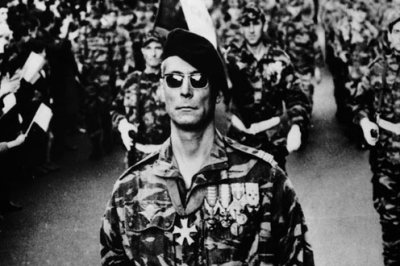 Reportedly screened at the Pentagon in 2003, Pontecorvo’s film depicts, in documentary style, the 1950s Algerian uprising against French colonialists. It is a sometimes harrowing account of the brutal tactics used by the French military, with torture part of their strategy. An even-handed account, there is no mistaking the resolve of the Algerian guerillas. “A model of how a film-maker can illuminate history” – Derek Malcolm. (Cert 15)
Dir: Gillo Pontecorvo 117 mins Italy/Alg. 1966

Screening arranged with Argent Films the DVD publishers of Battle of Algiers.

“With its majestic music and a flawless level of action and tension, this still remains one of the most politically powerful films ever made.”

“Perfectly filmed, this could provide an invaluable lesson to today’s imperialists. So many murders, so much brutality and [yet] they still lost a few years later.”

“Brilliant, immensely powerful film – it had me sympathising with Moslems.”

“Terrorism has been around for longer then we imagine. Are we still fighting tactical wars? Or are the tactics of others forcing us to respond in that way? A very real film, horrifying and sobering. I’m very pleased to have seen it.”

“A great success in achieving a feeling of realism, especially the absence of mock heroics and impossible feats.”

“An outstanding re-creation [in its] style, direction and camera-work”

“Powerful – very tense throughout. I can see why it was banned in France!”

“Very realistic and well produced. Having spent much of the late 1950s in France, I well remember that the French had very different view of Algeria and were strongly determined to keep it French!”

“Not quite as I remember it from the British Press but probably a fair representation of the era.”

“Rather relentless. Colonel Mathieu rather ambivalent.”

“This film was a very good example of [how] the will of the people will sometimes prevail!”

“Wasn’t he [Col. Mathieu] only meant to blow the bloody door off? Realistic film but with little variation in pace.”

“The British were colonialists too.”