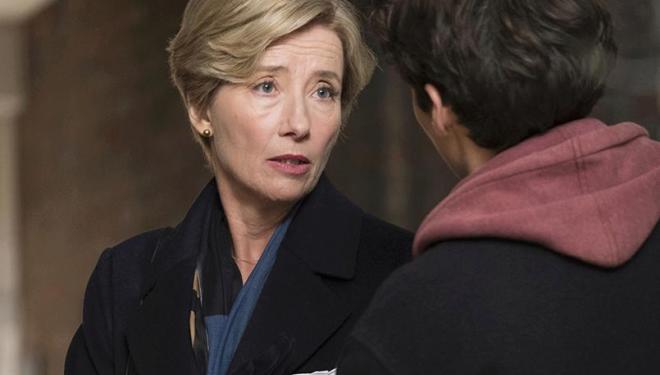 Adapted by Ian McEwan from his eponymous 2014 novel, The Children Act is a disciplined, intelligent exploration of the heart of a marriage that is in danger of falling apart. In his novel, and in this adaptation, McEwan remains true to his original concepts that work and desire are the oil and water of civilised society, that rules protect us from chaos and that, without them, rational thought would be terrorised by moral banditry.

The central character of this month’s film, Fiona Maye, is a highly successful and well-respected judge, specialising in difficult cases involving complex legal arguments and moral judgements. She takes on the case of Adam, a teenage boy who has cancer but refuses treatment (a blood transfusion) that would save his life. His parents are Jehovah’s Witnesses
whose beliefs lead them, on religious grounds, to also refuse medical intervention. Fiona believes passionately that the boy’s life should be saved. In the event, her deep involvement in this fraught situation leads to dramatic and unforeseeable events, with devastating consequences.

Fiona’s marriage to Jack, an academic, is childless and in the doldrums, mainly as a consequence of Fiona’s intense devotion to her career. As a result, he is openly seeking new female companionship and his wife’s near obsession with Adam’s case provides a focus for and catalyst to this unhappy situation.

Although the film may not faithfully mirror Ian McEwan’s book (which films seldom do, as they become the director’s narrative) the film was a beautifully made depiction of a dedicated female judge (fantastic performance by Emma Thompson) whose career has crashed through the glass ceiling, with all the personal life complications that can bring. Her dedication to her work has, in the view of her husband, taken precedence over their marriage (I wonder if this would have been an issue had their roles been reversed) and when a particularly complicated case involving a teenage boy whose life is in danger if a course of medical treatment is not given, the judge has to confront some of the difficulties in her own life. Great performances from all the cast, an immersing legal drama.

Thank you – a good choice. We enjoyed the film and felt it was well acted and a faithful portrayal of the novel. It raised many ethical issues and moral dilemmas – so lots to contemplate.

A sad tale, well told. A few liberties taken with the book but quite faithful in its intent.

A well crafted film – Richard Eyre on top form. Excellent performances all round, particularly Emma Thompson – who seems incapable of doing anything badly! Fionn Whitehead (as Adam) was notable for his sensitive portrayal in a potentially difficult part. My overwhelming reaction in the end was that of the tragic consequences of religious dogma and the resulting closure of minds to rational thinking.

Although the film is thoroughly compelling and very watchable, it comes across somewhat sloppily in its thematic presentation.