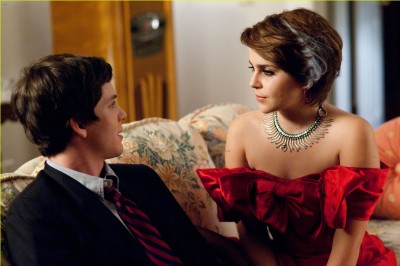 A superior coming of age movie, this debut film from Chbosky, who also wrote the original novel, is set in affluent 1990s Pittsburgh. Shy teenager Charlie has issues in his past and upon commencement at his new high school, is befriended by senior step-siblings Sam (Emma Watson) and Patrick (Ezra Miller). Both Watson and Miller are well cast and there is sufficient depth in the characterisations to keep the viewer involved in the teenage angst. “… it’s to the credit of this gentle, plainly personal debut from [the] writer-director, adapting his own popular 1999 youth novel, that we’re on the kids’ side from the get-go” – Guy Lodge, Time Out. (Cert 12A)
Dir: Stephen Chbosky 102 mins USA 2012

Based on his own novel, The Perks of Being a Wallflower is the feature-length directorial debut from Stephen Chbosky (who wrote the screenplay to Rent (2005) and The Four Corners of Nowhere (1995)). The film focuses on Charlie, played by Logan Lerman (The Percy Jackson films; 3:10 to Yuma (2007)), as he is about to start high school for the very first time. Feeling a bit of an outsider, he becomes well acquainted with a pair of friends called Sam and Patrick, played by Emma Watson (of Harry Potter fame) and Erza Miller (We Need to Talk About Kevin (2011); City Island (2009); Afterschool (2008)) respectively. The film follows this group of friends through the highs and lows of high-school life, including falling in love.

Filming this project was a rewarding experience for Emma Watson, as this was her first major role after the Harry Potter films. Chbosky wanted to cast her as Sam after seeing her in Harry Potter and the Half-Blood Prince (2009). She was promised by Chbosky that this was going to be one of the most important parts she would play and she would have ‘the summer of her life’ whilst filming. She later reported this to be true in an interview with Entertainment Weekly.

The film received several accolades in North America, including two People Choice Awards, and three Teen Choice Awards, which included awards for Lerman and Watson. Erza Miller pickied up awards at the 2012 Boston Society of Film Critics Awards, a Chlotrudis Award for Best Supporting Actor, and the Spotlight Award at the 2012 Hollywood Film Festival. The film won Best First Feature at the 2013 Independent Spirit Awards.

“The Perks of Being a Wallflower hurts. It hurts because it depicts the loneliness, anxiety, and all-out quivering mess of adolescence in a manner not often seen since John Hughes’ heyday.” Amy Biancolli, San Francisco Chronicle.

“It offers the rare pleasure of an author directing his own book, and doing it well. No one who loves the book will complain about the movie, and especially not about its near-ideal casting.” Roger Ebert, Chicago Sun-Times.

“The Perks of Being a Wallflower finds an unexpectedly moving freshness in the old clichés by remaining attentive to the nuances of what happens within and between unhappy teenagers.” Ty Burr, The Boston Globe.

“An exquisite character study peppered with likeable personae and with an eclectic soundtrack. Probably one of the best high-school movies ever made.”

“Brilliant – I don’t think I will ever be able to listen to Heroes again without seeing the tunnel scene in my head.”

“Great film – I enjoyed this!”

“A school film I actually enjoyed!”

“Seemed a bit slow to get going. Good music.”

“No black people! Such a rigidly expressed culture for a free society. Good intentions but not comprehensible.”

“Had a problem understanding the dialogue and also parts of the plot. Maybe age really has caught up with me!”

“I couldn’t make out they were saying most of the time, so I didn’t understand it. Perhaps I should read the book – or perhaps not!”

“Without the valiant performances of Ezra Miller and Emma Watson, this would have been truly ghastly. Watson’s later The Bling Ring gave a far more interesting and contemporary angle on American teens.”

“Even Hermione couldn’t save this film from being tedious and predictable. Good music, though!”