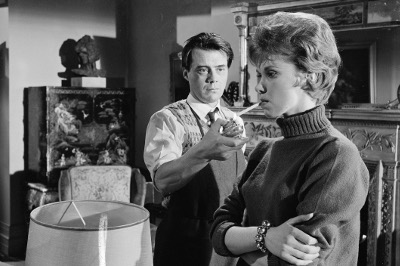 The Servant was the first of three collaborations between director Joseph Losey and writer Harold Pinter, in a film which darkly captures the social and sexual politics of the 1960s, and the pursuit of a new order. The performances by the ensemble cast of Dirk Bogarde, James Fox, Sarah Miles and Wendy Craig have become iconic in the interval. The cinematography and the use of mirrors heighten the psychological tension between the characters. The soundtrack by John Dankworth and Cleo Laine provides an added dimension to the plot. “Through subtle visual clues Losey artfully blurs sexual boundaries to create one of cinema’s most memorable relationships. Packed with homoerotic subtext The Servant is a seminal title in British cinema and the British New Wave” – Leigh Clark, Cine Vue. (Cert 12A)
Dir: Joseph Losey 116 mins UK 1963

Based on a 1948 novelette by Robin Maugham, Harold Pinter’s film adaptation explores with voyeuristic relish the sexual and political power games within a small group of people in mutually claustrophobic proximity. The four main protagonists, Barrett (the servant), Vera, Susan and Tony, occupy what at first seem to be immutable places in the English social system. This perception is challenged as comfortable assumptions about the strength of class structures begin to unravel in the light of the behaviour of the group. Listen out for the John Dankworth/Cleo Laine rendition of “All Gone”.

“[Pinter] … was endlessly preoccupied with the treacheries inherent in the most time-worn relations” Tom Sulpen, Bright Lights Film Journal

“The performances are note perfect and Pinter’s script is smart, subversive and sly, lifting the lid on our age-old feudal hierarchy and having a good dig about inside. But it’s Losey’s direction which sets the nerves jangling – all deep shadows, distorted reflections and glowering close-ups. He quite literally takes us through the looking glass into a charged, claustrophobic fever-dream of privilege, power and perversion” Tom Huddlestone, Time Out

“Exquisitely depraved – I loved it!”

“Not as dated as I had feared. Script, performances and direction all held up pretty well.”

“Fantastic psychodrama but quite draining to watch.”

“Certainly an enjoyable experience, with its awe inspiring cinematography, its elegant sound design and a brilliant performance from Dirk Bogarde. It left me wanting more Harold Pinter!”

“I have rarely seen a more unpleasant film – although it was excellent.”

“What a horrible lot! Fascinating power struggles but the (excessive) laughing was a bit annoying.”

“Great soundtrack and music but the final scene didn’t seem credible. Was it meant to be an hallucination?”

“A powerful, creepy film but sound quality not good – missed some of the dialogue.”

“Went pretty well though I thought the sound needed attention.”

“As close as you will ever get to the Bullingdon Boys’ lifestyle!”

“I must say they seemed to enjoy things, even though they only had black and white. When did colour come in?”

“The first half was brilliant but the film lost it in the second half – it became too laboured.”

“Too long and drawn out as a film – much better as a play! Needed to be broken down episode by episode. Filming good but badly unhearable dialogue and sound.”

“I found the film had aged badly.”