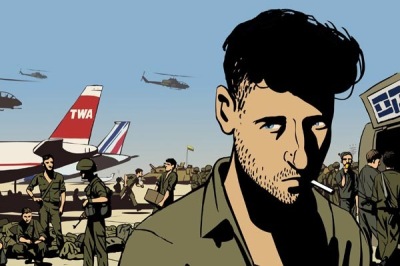 An exploration, using animation, of the events surrounding the massacre of civilians during Israel’s 1982 invasion of Lebanon. The director, a soldier at the time, seeks to remember what happened, together with fellow soldiers who, like him, have since suffered nightmares and loss of memory. This is linked to the collective memory of the Israeli people and their masters. The live footage at the conclusion of the film unblinkingly reveals the monstrousness of the carnage. (Cert 18)
Dir: Ari Folman 90 mins Israel 2008

For Ari Folman, an Israeli maker of documentaries, Waltz with Bashir is his first venture into animation. The film compellingly depicts some of the events of the 1982 Israeli invasion of Lebanon, according to the memories of some of the conscripts who took part, of whom Folman was one himself. The focal episode was the massacre of up to 3,000 men, women and children in two Palestinian refugee camps by Christian Falangist militia, an atrocity that continues to haunt Israel to this day.

The film opens with a vision of a pack of savage dogs running through a city and gathering under the window of an ex-conscript of the Israeli army and friend of Folman. This is his recurrent nightmare, dating from when he was ordered to shoot all the dogs in a Lebanese village. Folman, while asking him about his memories of the invasion, is shocked to discover that he himself remembers nothing. In talking to other ex-conscripts, he tries to piece together events as they are remembered by them, and finds that they too have repressed some of their worst memories, The discussions are almost psychoanalytic, as they also tell of their dreams and hallucinations. The style of the animation comes across as rough, wooden and unreal in often garish tones, but this fits the nature of the memories and nightmares as related by the participants. It also seems to emphasise the random and indiscriminate shooting and destruction in the war. At the end of the film, the animation gives way to real footage of the massacre’s immediate aftermath, and the horror of the atrocity becomes shockingly clear.

Folman addresses the question of culpability for the massacre. Although it was the Christian militia who carried it out, and (conveniently) not Israeli forces, nonetheless they were under nominal Israeli control. Were they ordered to do it? Were the Israeli commanders aware of what was happening, and if so, what did they do to stop it? How far up the chain of command did the buck stop? Folman is clear about the repression of guilt amongst the Israeli ex-conscripts, and points the accusatory finger as far up the chain as Ariel Sharon. Incidentally, the name in the title refers to Gemayel Bashir, president of Lebanon who was assassinated by terrorists just before the invasion.
RS

“Waltz with Bashir comes across as a sincere, personal and deeply painful undertaking that lets neither its maker nor his nation off the hook. It’s a brave and necessary film, remarkably inventive and, against all the odds, grimly entertaining too.” Jonathan Romney, The Independent on Sunday.

“Quite stunning – one can only assume the testimony was truthful. Man’s inhumanity to man knows no bounds.”

“A very powerful way to express the horrors of war”

“A deeply powerful and imaginatively made account of a much-ignored genocide. Visually as well as emotionally impressive.”

“Outstanding animation. Another ‘What would you have done?’ situation. A brave and honest film.”

“I had seen this before and didn’t want to see it again but [I’m] glad I did. Amazing animation – it really evoked the horror of war.”

“A powerful portrayal of a dark chapter in the region’s recent history. Excellent animation, although it did put me in mind of Nick Parks – ie, the real-life characters and dialogue.”

“An interesting film about this conflict but it felt patronising showing the same scenes from Folman’s dream over and over.”

“It didn’t make much sense to me but maybe that was the point. Why did he bother searching his colleagues’ memories when it had all been recorded on [the] newsreels?”

“I now know why I fell asleep while watching this the first time. Excellent animation – awful subject.”